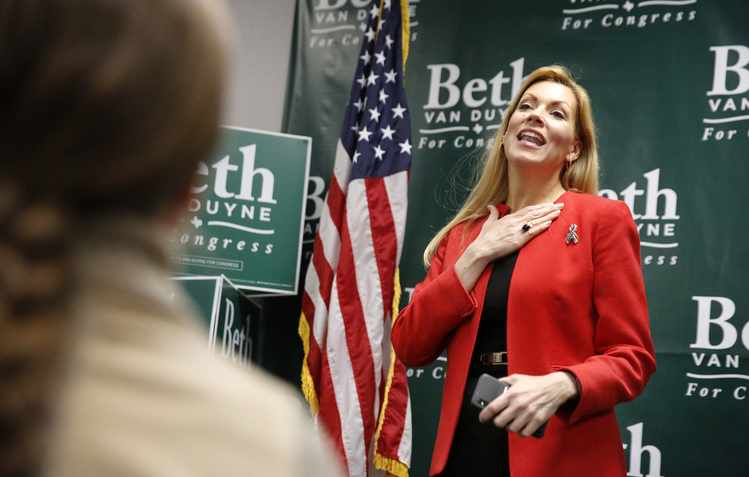 With several races still too close to call, the number of newly elected pro-life women is up to 16. Seven of these candidates flipped seats held by pro-abortion Democrats. The group includes the first Iranian American elected to Congress, a member of the Cherokee nation, a daughter of Cuban exiles, and a first-generation Korean American, showing that the life issue brings a diverse coalition together. Including incumbents, the total number of pro-life women in the House now stands at 27.

In the Senate, the ranks of pro-life women continue to grow. Joni Ernst (R-Iowa) and Cindy Hyde-Smith (R-Miss.) won competitive reelection races. Additionally, former U.S. Rep. Cynthia Lummis (R-Wyo.) won her race and will be the first woman to represent Wyoming in the Senate.

I remember when there was just a small handful of pro-life women in the House and none in the Senate. Over the years Susan B. Anthony List has worked tirelessly to fix this severe underrepresentation and counter the well-funded abortion lobby. This is breathtaking progress, something that Republican insiders and even some staunch pro-lifers doubted could be done.

Moreover, pro-abortion Democrats failed to flip a single state legislature despite spending historic sums of money. In New Hampshire, Republicans won a trifecta, unexpectedly flipping both chambers of the legislature while holding on to the governor’s office. In Texas, our team helped defeat pro-abortion radical Wendy Davis and more than a dozen others like her at the state level, while electing pro-life champions like Beth Van Duyne in U.S. House races. Our efforts succeeded in thwarting pro-abortion extremists’ plans to infiltrate the Texas legislature and redraw district maps next year, solidifying the state as a stronghold in the fight to defend unborn children.

This surge is a testament not only to the power of the life issue to motivate voters, but to its most high-profile champion: Donald Trump. Because of his presidency, party leaders are unified and energized, and it is practically unthinkable for Republican candidates anywhere to win elections without being pro-life.

Where the old Republican Party was glad to benefit from pro-lifers’ votes while holding them at arm’s length, President Trump fully embraced the pro-life movement and governed as the most pro-life president in history. He is the first president ever to get Planned Parenthood to forfeit Title X tax dollars or to address the March for Life in person.

Where Republican candidates used to speak timidly about abortion, if they spoke about it at all, he boldly called out his Democrat opponents’ support for late-term abortion and infanticide while repeatedly and publicly identifying his party with the protection of unborn children and their mothers. Under President Trump’s lead, the Republican National Convention featured the most explicit pro-life speeches ever given at a major party convention.

The president consistently delivered on his promises – most importantly, to nominate only constitutionalist judges. Because of President Trump and pro-life Senate Republicans, we have three outstanding justices on the Supreme Court – including the court’s first pro-life woman, Amy Coney Barrett – and more than 200 new federal judges who will serve for life, giving us the best chance in half a century to mount a serious, successful challenge to the status quo under Roe v. Wade.

In contrast, the Democrats led by Joe Biden and Kamala Harris hid their extreme views from the American people in the months before the election. At the Democratic National Convention, the word “abortion” was not uttered a single time – a stark difference from 2016, when three heads of pro-abortion groups secured prime speaking slots.

Whatever else happens, the American people have spoken. It is clear no “mandate” exists to enact deeply unpopular policies expanding abortion-on-demand through the moment of birth, paid for by taxpayers, as Biden and Harris have promised – or to drastically remake the brilliant system of checks and balances that has existed from the founding of our nation.

There is no more urgent task for pro-life advocates now than to ensure that the Senate remains in pro-life hands, standing as a firewall against any attempts by Democrats to eliminate the filibuster, expand the Supreme Court, or roll back vital pro-life policies like the Hyde Amendment. To that end, SBA List’s team is all in to re-elect Sens. Kelly Loeffler and David Perdue in the Georgia runoff elections this January.

Before the election, I wrote a book titled “Life is Winning,” inspired by a saying of Vice President Mike Pence, making the case that the pro-life movement was just one election away from achieving unimaginable victories and predicting that Joe Biden would be the last thoroughly pro-abortion presidential candidate. The rise of pro-life women leaves me more convinced than ever that momentum is on our side, and the battle to save unborn children and their mothers is one we can – and will – win.

Marjorie Dannenfelser is president of the national pro-life group Susan B. Anthony List.