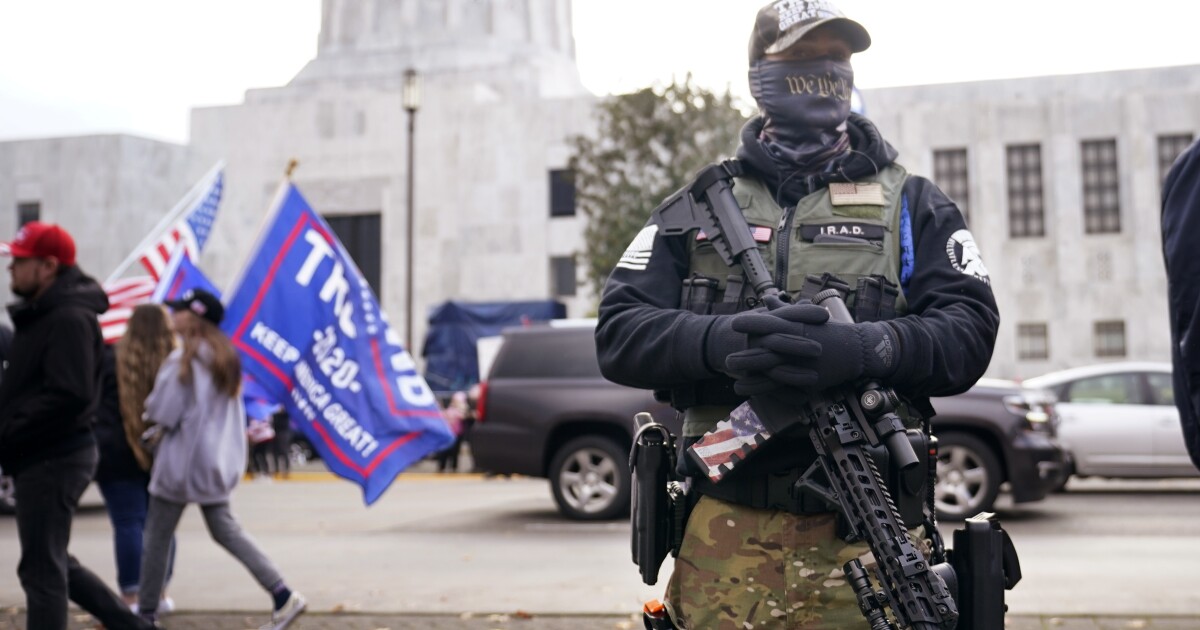 Supporters of President Donald Trump made it known at the Oregon State Capitol this weekend that they will not stand for having another Democrat in the White House.

Oregon has trended Democratic in the past eight presidential election cycles. That did not change this week when President-elect Joe Biden won the state by more than 1.3 million votes per the state's official Friday count.

President Trump has still not conceded to Biden at the time of this reporting.

Several hundred Trump supporters demonstrated in front of the state capitol in Salem on Saturday protesting what they describe as a fraudulent election.

It included a number of speakers who made unsubstantiated claims alleging the state's vote-by-mail system counted ineligible ballots.

Perkins, who trailed Democratic Sen. Jeff Merkley by more than 400,000 votes as of Friday, also announced her intent to run for U.S. Sen. Ron Wyden's seat in 2022.

On Friday, Cross was behind incumbent Attorney General Ellen Rosenblum by more than 300,000 votes. During Saturday's rally, he entertained the idea of demanding the state audit the 2020 general election.

Republicans have occupied the Oregon Secretary of State's Office for the past three years. Sitting Secretary Bev Clarno took over since the death of Dennis Richardson last year and will be succeeded by Democrat Shemia Fagan.

At least a quarter of Trump supporters present raised their hands when asked by Cross whether they were “exercising their Second Amendment rights” and many came armed with rifles and holstered pistols. Oregon is an open-carry state.

Many Trump supporters said they were aggrieved that the state's liberal majority has suppressed conservative voices.

“I think the president won,” said Rachel, a Trump supporter from Portland. “When I cast my vote in Portland, I didn't feel like it mattered.”

Since Tuesday, Oregon Democrats will likely take over all the state's executive offices. Their legislative majority, however, will likely fall short of a super majority in light of recent vote tallies.

A state legislative report said that the state has pursued 38 criminal convictions for voter fraud—or 0.0000006% of the 60.9 million votes cast since 2000.

The conservative Heritage Foundation found only 15 cases of voter fraud in Oregon over the past 20 years.

The demonstration was organized as part of the now banned “Stop the Steal” Facebook group whose ranks grew to 300,000 members before the social media site clamped down on it for alleged calls for violence.

A number of Trump supporters engaged in fist-fights with reporters documenting the demonstration as well as vandalizing a passing car with a Black Lives Matter window sticker.

Bicycle officers with the Salem Police Department maintained minimal presence at the capitol building and made no arrests that afternoon.

No unlawful assembly was issued to the Trump demonstrators who confronted BLM counter-protesters who marched to the capitol mall to exchange words with them. At least one person was pepper-sprayed by a rival demonstrator.

Local police and troopers with the Oregon State Police were at the scene to separate the two groups and arrested several more demonstrators.

According to Salem Police Department records, two individuals were arrested for disorderly conduct and two more were arrested for interfering with a police officer Friday night. Three were released on bail Sunday morning.

Similar pro-Trump demonstrations occurred on Saturday to the north in Vancouver, Washington as thousands more celebrated Biden's election in Seattle and Portland.

Gov. Kate Brown officially ended her declaration of emergency for Portland on Sunday.

“Whether you voted for the current President or the President-elect, we are all Americans,” Brown said. “As the election draws to a close, now the hard work begins. In Oregon, we talk about our differences, and we overcome them.”

The Trump campaign threatened this week to sue Wisconsin and other swing states over Saturday's unfavorable presidential election results.