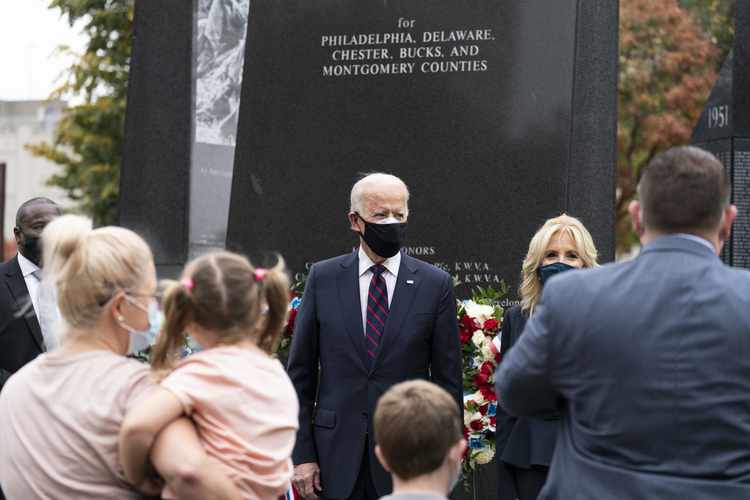 Joe Biden says he wants unity and promises to be a president that represents all Americans not just Democrats.

“Let's give each other a chance,” he told his supporters at a rally in Delaware on election night. “It's time to put away the harsh rhetoric. To lower the temperature. To see each other again. To listen to each other again. To make progress we must stop treating our opponents as our enemy,” he said. “We are not enemies. We are Americans.”

A well-scripted sentiment that's out of touch with our deeply divided nation as the Democratic Party and its media allies have spent the past four years calling Donald Trump's supporters racist — and every other repugnant smear you can think of. That's not exactly a way to win over half the country and heal the nation.

Worse, Democrats' extremely divisive smear campaign against conservatives, a tool the left uses to obtain power and win elections, has no basis in reality. Just take a look at the latest election results.

“Twenty-six percent of non-white voters cast their ballots for President Trump,” reports the National Review. A 25% increase from 2016, which means Trump's support from the Black community and Latino voters has gotten stronger despite the nonstop cries of racism by virtually every mainstream media outlet.

Similar increases were seen with Muslim voters where despite the left telling us the president is “xenophobic” and an “Islamaphobe,” his support from this community grew significantly. “Among Muslim voters, 64% supported Biden and 35% supported Trump,” reports the AP.? With Latinos, Trump won the state of Florida handily, acquiring 55% of the Cuban American vote. Nationwide, Trump's support with Latino voters climbed from 28% in 2016 to 32% in 2020.

Trump doubled his support from gay voters. And the majority of white women, 55%, supported Trump.

So much for being a “sexist,” “racist,” “homophobic” or “Islamaphobic.”

And those aren't the only baseless smears Biden's backers have been peddling. Just last week, an opinion columnist from The Boston Globe compared Trump supporters with ISIS in a despicable tweet that went viral.

Did the Biden camp denounced the sick comparison and defend conservatives? Fat chance. Biden and Harris both ignored it. As did the Boston Globe, resulting in readers canceling their subscriptions in protest, myself included.

But wait, there's more. In a tweet three days after the election, Rep. Alexandria Ocasio-Cortes, D-New York, asked: “Is anyone archiving these Trump sycophants for when they try to downplay or deny their complicity in the future? I foresee decent probability of many deleted Tweets, writings, photos in the future.” This “archiving” of enemies is something Hitler did during the Holocaust.

Washington Post columnist Jennifer Rubin, a rabid “Never Trumper” was more explicit. On Nov. 6, she tweeted: “Any R now promoting rejection of an election or calling to not follow the will of voters or making baseless allegations of fraud should never serve in office, join a corporate board, find a faculty position or be accepted into ‘polite' society. We have a list.”

Again, has Biden or Harris denounced these extremist threats and hateful rhetoric directed at the 72 million Americans who voted for Donald Trump? No. Their silence is deafening.

Bottom line: If Biden is sincere in his desire to unite the nation, then he must condemn these fascist tactics from his supporters or spare us the vacuous platitudes.