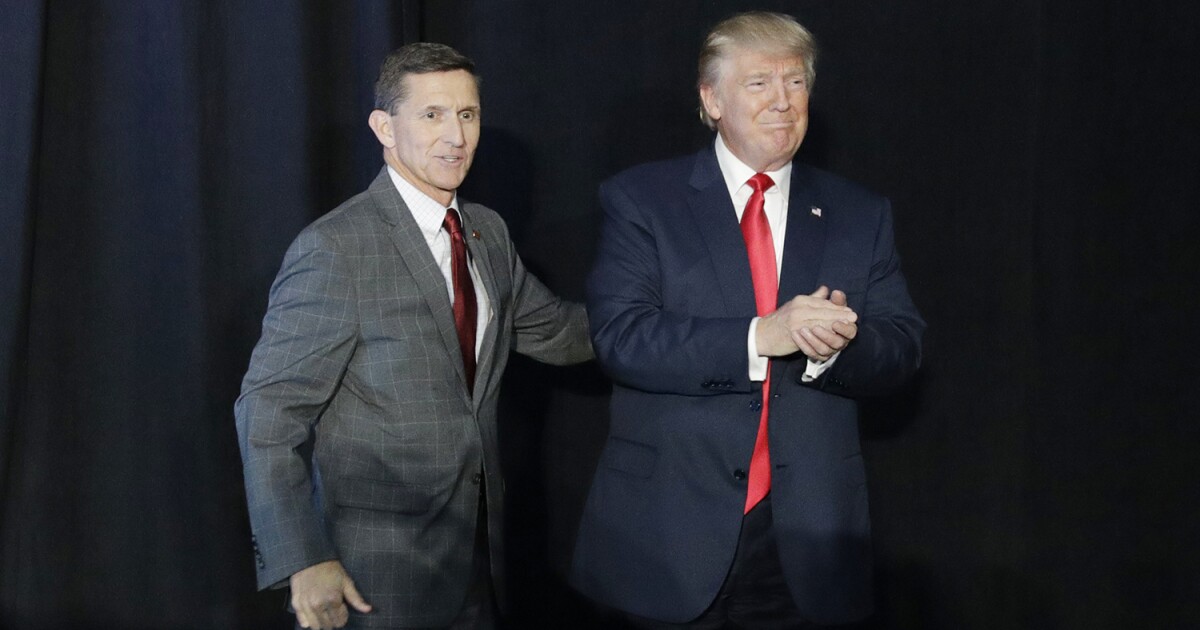 A federal judge granted a long list of motions on Monday from outside groups asking to weigh in on the Justice Department’s motion to drop the case against retired Lt. Gen. Michael Flynn.

The schedule indicates the judge, Emmet Sullivan, will stall on dismissing the case even after President Trump granted his former national security adviser a full pardon late last month. Appearing to ignore the Justice Department’s request for the case “immediately” to be dismissed, the judge, who has been involved in the Flynn case since December 2017, instead moved forward with further debate, with the district court docket showing more than a dozen groups had now been given the green light on amicus briefs they asked permission to file weeks ago.

Trump announced the Flynn pardon the day before Thanksgiving, tweeting, “It is my Great Honor to announce that General Michael T. Flynn has been granted a Full Pardon.”

Flynn, 61, fought to dismiss the government's case against him this year after he pleaded guilty in December 2017 to lying to investigators about his intercepted December 2016 conversations with Russian Ambassador Sergey Kislyak.

Sullivan's granting of the friend-of-the-court filings instead of just dismissing the case suggests he may drag the proceedings out until President-elect Joe Biden takes office and beyond.

On Friday, fellow U.S. District Judge Reggie Walton, who is handling a Freedom of Information Act case related to special counsel Robert Mueller’s investigation, opined that Sullivan might choose to scrutinize Flynn’s pardon. Walton said he didn’t believe Sullivan “has a lot of options in reference to what he does … unless he takes the position that the wording of the pardon is too broad,” according to the National Law Journal, adding, “theoretically, the decision could be reached because the wording in the pardon seems to be very, very broad. It could be construed, I think, as extending protections against criminal prosecutions after the date the pardon was issued.”

Sullivan’s new orders allow multiple groups, roughly half of which support dismissal and half who oppose it, to provide their thoughts.

The National Association of Criminal Defense Lawyers said it supports Flynn and “seeks leave to file in order to provide the Court with the broad perspective of an organization whose members deal with guilty pleas and their aftermath on a daily basis.” The Uniformed Services League said it would speak in favor of the motion to dismiss and against the idea that Flynn is in contempt of court or has committed perjury. A “bipartisan group of attorneys with extensive experience in the federal court system” was given permission to “argue that, under the constitutional separation of powers, the court laws discretion to deny a Rule 48(a) motion to which a defendant consents.” Citizens United said that “this case presents questions of great importance concerning the separation of powers and the law governing the procedures for termination of a criminal proceeding found to be baseless.” And Ohio Attorney General Dave Yost, along with 14 other states, will file a brief arguing that “the Department of Justice’s exercise of prosecutorial discretion must be allowed.”

Democratic members of the House Judiciary Committee were given permission to file a brief opposing the Flynn dismissal, saying they wanted to “ensure that federal prosecutorial decisions are never dictated by partisanship.” Seventeen individuals who served in the Justice Department’s Watergate Special Prosecution Force claimed that “the Court has broad authority to inquire into, and if warranted, deny, the Government’s Rule 48(a) motion.” A group called the Separation of Powers Scholars argued that “the separation of powers … protects this Court’s authority to complete the resolution of this case.” A group of 1,187 former Justice Department officials will weigh in “in support of this Court’s authority to refuse the government’s request to dismiss its prosecution” of Flynn. Another group called The Steady State, comprised of former national security officials, claimed the DOJ motion to dismiss is “inconsistent with U.S. national security interests.” And a group of criminal law professors argued federal rules are “designed to protect against corrupt or politically motivated dismissals.”

Others who were given the go-ahead to weigh in include Open Arguments Media, We Who Served, Turkish businessman Kamil Ekim Alptekin, and Lawyers Defending American Democracy.

Flynn told the court in January that he was “innocent of this crime” and filed to withdraw his guilty plea. The Justice Department later moved to drop the charges in May, following a deep-dive review by U.S. Attorney for the Eastern District of Missouri Jeffrey Jensen. The DOJ said that “continued prosecution of this case would not serve the interests of justice.”

Instead, Sullivan, an appointee of President Bill Clinton, appointed retired New York judge John Gleeson to present arguments in opposition to the Justice Department’s motion and to explore whether Flynn should be charged with perjury or contempt.

Flynn’s lawyers, led by Sidney Powell since last summer, argued in October that Sullivan’s “increasingly hostile and unprecedented words and deeds in what has become his own prosecution of General Flynn mandate his disqualification.” Acting Solicitor General Jeff Wall said in August that the Justice Department “reluctantly” believed that Sullivan might need to be removed because he seemed to have “prejudged” some of the questions in the case.