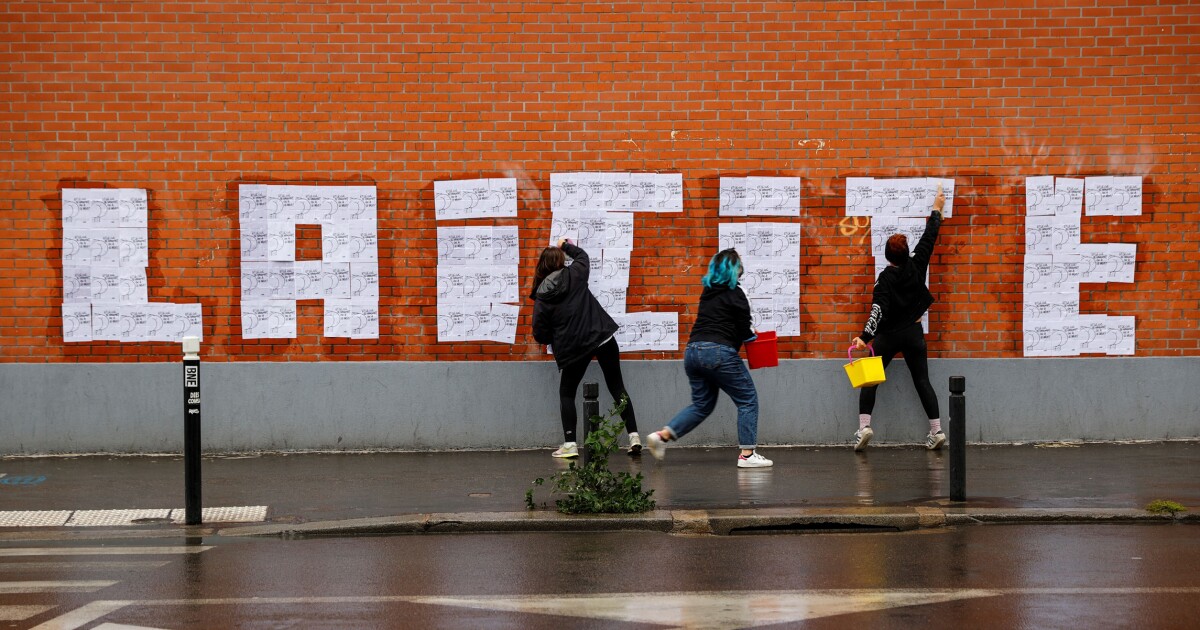 The French government is fighting on two fronts: one against Islamism and one against “American multiculturalism.” The first front is nothing new. The Oct. 16 beheading of Samuel Paty, a teacher who showed his class drawings from Charlie Hebdo mocking Muhammad as part of a lesson on freedom of expression, was horrific but unsurprising. Equally predictable was the subsequent wave of terror attacks in France and demonstrations across the Muslim world. Such events sadden but can no longer shock. Americans have been surprised, however, to see the French responding to these attacks by targeting not only networks of Islamic radicalization but also the United States's media and universities.

“Falling in line with American multiculturalism is a kind of intellectual defeat,” French President Emmanuel Macron warned last week, frustrated by American journalists’ coverage of Paty’s murder and its aftermath. The New York Times initially covered the story as if it were an episode of American police violence, using the headline “French Police Shoot and Kill Man After a Fatal Knife Attack on the Street.” This headline provoked fury in the French government and throughout the French press, which fulminated against American “blindness” and “indecency.”

The New York Times was not alone in interpreting events in France in hyperracialized and moralizing terms, now the obligatory register of U.S. prestige media. The Washington Post complained: “Instead of Fighting Racism, France wants to ‘reform Islam.'” In such stories, France, like the U.S., is a land of white supremacy. The problems of France's Muslim population, from everyday criminality to rejection of mainstream French values to terrorism, are either the invention of racists or themselves the consequences of racism.

It is naturally unpleasant for the French to hear their country spoken of in such terms, especially by Americans, at a time when the U.S. is wracked by racial discord. Right-wing French newspapers, such as Le Figaro, were quick to give space to Americans such as Thomas Chatterton Williams, who reassured the French that the U.S. media misunderstand France’s “specificity” and exaggerate the problem of racial discrimination.

Members of the French government, however, believe that the problem goes deeper than misrepresentation. French Minister of Education Jean-Michel Blanquer recently argued that the coverage of the New York Times and the Washington Post reflects the dominance in U.S. intellectual life of what he referred to as “intersectional theses.” In Blanquer’s account, ideas about what Americans commonly refer to as “identity politics” threaten France’s political stability by actively producing the racial and cultural divisions they claim to describe neutrally.

Blanquer’s argument, which was met with condemnation from many French scholars, may seem to echo populist rhetoric throughout the world. From Hungary to India to the U.S., populist leaders have railed against journalists, intellectuals, and foreigners for supposedly undermining national unity. But French suspicions of America's intellectual influence have a deeper foundation. Long associated with the Left, these suspicions are a reaction to America's role in promoting ideas opposed to the values of the French Revolution and the identity of the French nation.

In the years following World War II, the U.S. attempted to break the hold of the militantly anti-American and intensely nationalist Communist Party on French intellectual life. The CIA covertly funded anti-communist ventures, such as the magazine Preuves, in which supporters of pro-U.S. policies, including philosopher Raymond Aron, frequently published essays. After the CIA’s role in these operations was revealed in 1966, French leftists began to suspect the influence of the U.S. intelligence agencies everywhere. The so-called “revisionist” historians of the 1970s, including Francois Furet, who argued that the Jacobinism of the French Revolution was the prototype totalitarianism, were accused by their critics of being CIA agents out to tarnish the legacy of 1789.

The traditional French Left was dealt another blow by the enthusiastic American reception in the 1970s and 1980s of left-wing French philosophers such as Gilles Deleuze and Michel Foucault, who criticized Marxist theory and the Communist Party. Though these “postmodern” thinkers were rather marginal in French universities, they became academic superstars in the U.S., where their theories were reworked to become part of a new elite consensus then germinating on college campuses.

In his book French Theory, the intellectual historian Francois Cusset traced how U.S. academics jettisoned the aspects of Foucault's and Deleuze’s ideas that criticized capitalism and mass media while using other parts of their work as a tool to study “cultural identity.” In France, the postmodernists had been understood as critics of unitary notions of the self and of the complex relations between language and power. In the U.S., they became gurus whose work supposedly proved that all mainstream culture was premised on the oppression of racial, cultural, and sexual minorities. Now hegemonic in U.S. universities, a distorted version of their ideas, organized around the watchword of “intersectionality,” is returning to France, where, in the meantime, the Marxist Left, oriented toward anti-American nationalism and a defense of the legacy of 1789, has all but disappeared.

Today, it is the French Right that bemoans the U.S.'s intellectual influence. As Bruno Perreau observes, the movement against gay marriage in France during the mid-2010s was organized around fears of “gender theory,” which, according to its French detractors, “was invented in the United States, a society built on a consumerist, communitarian, and politically correct model … incompatible with France's own traditions.” Focusing on the influence of American theory allowed French opponents of gay marriage, mostly conservative Catholics, to avoid framing their arguments in explicitly religious terms and to claim that they were opposing America’s atomized and conflict-ridden society. Although unsuccessful, the movement against gay marriage in France served as a model for similar campaigns in Eastern Europe, which link domestic debates about the rights of sexual minorities with fears of Americanization.

French conservatives are not crazy to fear that American ideas are influencing their society. American theories about identity are being taken up by intellectuals and activists behind what Blanquer and others call “Islamo-gauchisme” (“Islamo-leftism”): a convergence of the post-Marxist Left with Islam. One of the most radical groups in this camp, the Indigenes de la Republique, has used appeals to “intersectionality” and connections to U.S. universities, such as the University of California, Berkeley, to present its opposition to French secularism as part of a progressive movement to “decolonize” France rather than as a specifically Muslim religious agenda. However, as Itay Lotem, a leading expert on the Indigenes, points out, this group is only selectively intersectional — it opposes gay marriage and “white feminism” on the grounds that focusing on sexuality and gender divides the Muslim community.

The French Right's attacks on “gender theory” and the Islamo-leftists’ tactical ambivalence toward intersectionality suggest that the French government's recent bluster against U.S. ideology covers a more disturbing reality. Opposing forces in an increasingly divided society use concepts imported from the U.S. to present religious conflicts in secular, progressive terms. Perhaps the real intellectual defeat for France would be to remain trapped in arguments for or against American ideology. And perhaps the real victory would be to face down the sectarian divisions that this discourse obscures.

Blake Smith is a Harper Schmidt fellow at the University of Chicago, where he works on cultural ties between France and India.