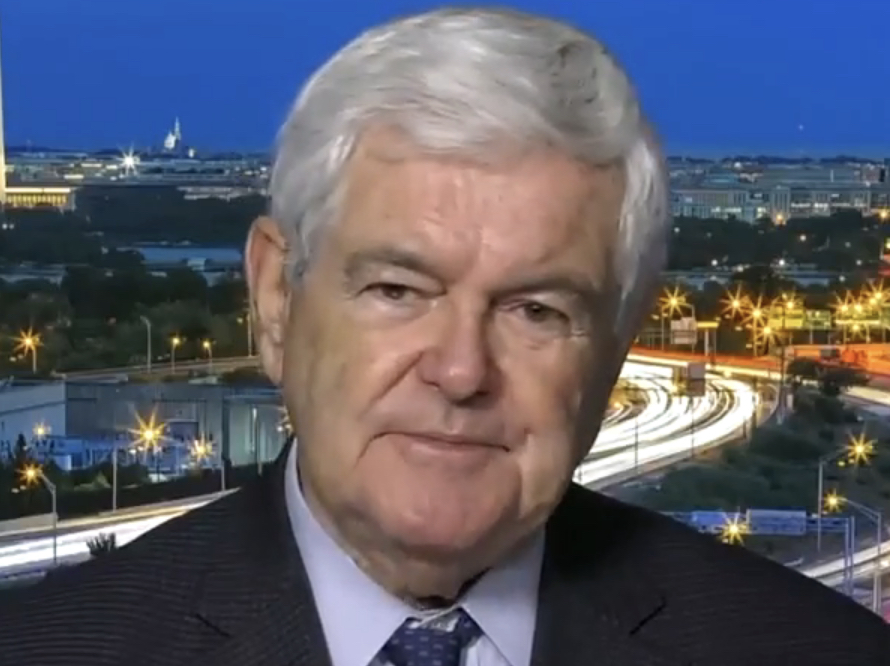 Gingrich said it looks to him like the Democrats have “stolen five or six states” an urged President Trump to continue his fight in the courts.

“This is not a coronation. We have a legal process. We get to have recounts. We get to verify things. We go to go to court. None of this is over until that entire process has been followed,” he said.

NEWT GINGRICH: Well, it's a nice sentiment. First, you go out and the Democrats steal five or six states, and that's what Republicans believe we're watching. We think we have evidence of a lot of it. Then you turn around and you say let's forget four years of Nancy Pelosi, let's forgot four years ago of impeachment, harassment, opposition, hostility, hatred, and now that I've won, why don't we make nice together?

I think he would have to do a lot to convince Republicans that this is anything except a left-wing power grab, financed by people like George Soros, deeply laid in at the local level, and, frankly, I think that it is a corrupt, stolen election. It's very hard for me to understand how we're going to work together without some very, very big steps by Biden. And I have — I have doubts if the left-wing of his party would tolerate him genuinely trying to work with Republicans.

FOX NEWS HOST: And that hope, I do think, requires us to ignore that every time the Democratic Party and most of its surrogates have been pushed on the issues they've resorted to character attacks on anyone that dared to disagree, Newt. So I want to ask you this. Do you think they even try? That is happy talk, yes, it's true; that is optimistic talk coming from Joe Biden. But it is a serious question, Newt because we're already hearing from people like Alexandria Ocasio-Cortez, who's talking about compiling a list, campaign staffers for Pete Buttigieg. Who drives it? That's the question. Who drives this call for unity? Who drives this message? Who drives the Democratic party in the coming years?

NEWT GINGRICH: Well, look and who turns it into reality? I mean the fact is we believe, in Philadelphia, in Detroit, in Milwaukee, in Arizona, I suspect they're going to try to steal North Carolina next and Fulton county, Georgia.

We believe these people are thieves, we believe the big city machines are corrupt. Interestingly Patrick Basham, who's the most accurate pollster — he's British — wrote in a British newspaper this morning that this clearly was a stolen election, that it is impossible to imagine that Biden outran Obama in some of these states.

And he said if you look at places like Cleveland or Chicago or New York, none of this happened. But where it mattered, they stole what they had to steal. And I think that they have a big mountain to climb if they think they're going to get — some Republicans will, frankly, run up and accommodate 'em and be nice and hope that the media likes them. But the base of the Republican Party is going to really want us to remember Nancy Pelosi and to offer them the same level of cooperation that Pelosi for four years offered the president.

PETE HEGSETH: Exactly. It's laughable to believe that there will be some clean slate of unity at this point after what was done to President Trump. But speak to those Trump supporters. Not the Republicans like you said that want to live in the warm glow of the establishment media, but supporters who do feel like this election was stolen and they feel like the count needs to continue. What's the approach going forward for those people?

NEWT GINGRICH: Well, I think the first approach is to say anyone you run across, as I have — for example, we just had our ambassador to Denmark tweeted out that her husband's been dead for five years. She just got a ballot from Los Angeles for him to vote. She voted in Pennsylvania and her vote when she checked last night still hasn't been counted. So I would say, first of all, in the immediate future find every example you can of some kind of polling discrepancy, some kind of inaccuracy, somebody who was turned away. We just learned that in Maricopa County, Arizona, they were taking the Trump voters who had to fix their ballot, telling them to press a green button so that it would be counted, but the green button in fact discounted it. So, they're now arguing over recounting a whole wave of things where the poll workers deliberately were destroying Republican ballots. And I think you will find this in county after county.

JEDIDIAH BILA: Yeah, Newt. No, I just want to ask you for clarity, because the accusation of incidents of voter fraud, which do happen in every election, unfortunately, is very different from the accusation of a stolen election. That's very serious. The implication here is that there's enough widespread voter fraud going on that would have changed the outcome of the election. I haven't seen evidence of that to this moment. Is that what you're suggesting has happened here?

NEWT GINGRICH: What I'm suggesting is you don't see the evidence because the local officials who are Democrats hide the evidence and then turn to you and say, “Since you have no evidence.” So they say, “Oh, we let the poll watchers in the building.” That's right. But they kept them far enough away they couldn't see anything. And I think I can show you case after case, it happened magically at almost exactly the same moment on election night that a series of key states quit counting, almost as though they were coordinating what they were doing.

And then it happened a few hours later, about 4 in the morning, that they had huge data dumps of Biden votes. Now, I don't know how — how do you prove that without really having to get the FBI directly involved? And given the FBI for the last four years, why would you trust them? The entire deep state has tried to destroy Trump for four years. We know it now as a fact. We know that — how hard they worked to undermine him. And I think if you're a typical Trump supporter, you regard this as an effort by people on the left to do everything they can at every level, including the news media. The news media's 93% anti-Trump.

PETE HEGSETH: Why wouldn't they?

NEWT GINGRICH: Why would we take — the news media anointing Biden? Yeah. I mean, you know, this is not a coronation. We have a legal process. We get to have recounts. We get to verify things. We go to go to court. None of this is over 'til that entire process has been followed.