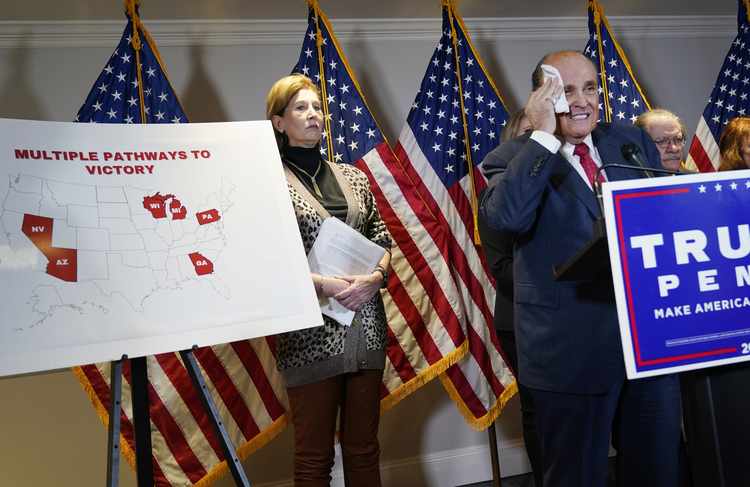 Beads of sweat — mixed with what looked like hastily applied hair dye to create twin rivers of brackish perspiration — trickled down both sides of Rudy Giuliani’s face as the president’s increasingly frenetic lawyer argued Thursday that his client had been robbed. In alleging that the presidential election was rigged against Donald Trump, the former New York mayor even acted out a scene from the 1992 comedy “My Cousin Vinny.”

Hours later, with charts and graphs and a characteristically calm demeanor, the vice president of the United States led another press conference, this one with the White House coronavirus task force. Mike Pence invited those experts, one by one, to discuss rising case counts, the need for social distancing through the holidays, and the vaccines that will hopefully bring about the beginning of the end of the pandemic.

Pence certainly did look presidential, and the clashing images from the dual press conferences underscored discordant Trump World themes in which the pandemic, politics, personality and biology are all colliding.

Joe Biden has dismissed most of the election-count drama so far as a violation of traditional niceties that, in the end, won’t matter. “I find this more embarrassing for the country than debilitating for my ability to get started,” the president-elect said Tuesday. After all, it is not like the former vice president needs a tutorial on the White House directory during the transition. But Biden would like one thing: access to Operation Warp Speed. He wants his team to coordinate with Trump’s on  plans to distribute the various vaccines under development so that the Democrat can continue the work that his Republican predecessor started.

What happens if the two don’t start coordinating? “More people may die,” Biden warned during that same press conference. Administering 100 million tests has already proved to be a huge logistical challenge. “Just imagine how much more difficult it will be,” he said Thursday, “if we don’t find a more efficient and effective way to provide 330 million vaccinations.”

No one disagrees on that point. Not only must the Pfizer vaccine be administered twice, the doses have to be stored and transported at an extremely frigid temperature, negative 94 degrees Fahrenheit, to remain effective. As many have noted, that is colder than the worst winters in Antarctica. So before the federal government can even decide who will administer the vaccine, it has to handle another challenge: securing the ultra-cold freezers to maintain the drug’s effectiveness. (An Army general with expertise in logistics, Gustave F. Perna, has promised that plans are in place to accomplish that and other daunting distribution tasks.)

Giuliani and the rest of the president’s legal team were not thinking about those temperature concerns while under the bright lights at Republican National Committee headquarters on Thursday. They indicated that their legal wrangling would last weeks if not months. “What you’ve heard now,” Jenna Ellis told reporters an hour into the press conference, “is basically an opening statement.”

Giuliani insisted that the way mail-in ballots swung for Biden indicated that “there was a plan from a centralized place to execute these various acts of voter fraud.” He cited sworn affidavits of wrongdoing from poll workers in Michigan and Wisconsin. But he couldn’t show direct evidence, he said, because “these people don’t want to be harassed. They don’t want to have their lives torn apart by the goons on the other side.”

The most dramatic claims came from Sidney Powell, the former prosecutor who had promised previously to expose widespread fraud and “release the Kraken.” On Thursday, she alleged that voting machines developed by Dominion Voting Systems had been intentionally engineered to alter outcomes, claiming that a nefarious “algorithm was likely run across the country to affect the entire election.”

“What we are really dealing with here and uncovering more by the day is the massive influence of communist money through Venezuela, Cuba, and likely China in the interference with our elections here in the United States,” Powell said. The company has “categorically denied” that claim, echoing a statement by the Department of Homeland Security that the presidential election was “the most secure in American history.”

At one point during the press conference, the official livestream was interrupted as unknown voices could be heard making fun of the sweat running down Giuliani’s face. The campaign later tweeted that the voices “were NOT campaign employees.”

Pence didn’t mention any of this — not the legal disputes or the requests for cooperation from the incoming administration — during his team’s hour-long press conference at the White House. Instead, in his first address with the task force since June, the vice president promised that “we're getting there, America.”

But until vaccines can be widely distributed, and as cases spike across the country, task force coordinator Dr. Deborah Birx repeated the call to “every American to increase their vigilance.” As Pence nodded along in agreement, each of the assembled experts said this means wearing a mask, washing hands, and maintaining social distancing.

“I hope everything you’ve heard today gives evidence of what I said at the start, that America has never been more prepared to combat this virus,” Pence said. “But let me be clear as I close: We all have a role to play in the days ahead. We are rounding the corner to that day that we have a vaccine for the American people.”

And then, as Pence walked out of the room, reporters erupted. “You’re all undermining the democratic election,” one yelled. Another shouted, “Why is the federal government not taking questions?”

While the vice president didn’t say a word about Biden, the coronavirus task force reinforced the message from the president-elect that, even with a vaccine on the way, the country is still headed for “a dark winter.” For his part, Giuliani indicated this season would include another ongoing battle, this one on a legal front.

Asked by a reporter if he would present hard evidence of wrongdoing to the public or if he was just dragging out the process, the president’s lawyer grew irritated.

“Al Gore had a lot more time than we’ve had, and we’ve had two weeks to investigate. So that’s also completely unfair to say we’re dragging it out,” he said of the last contested presidential election. And as far as evidence goes, Giuliani added, “if we’re going to present things in court, if we present it to you, judges are not going to be very happy with us.”