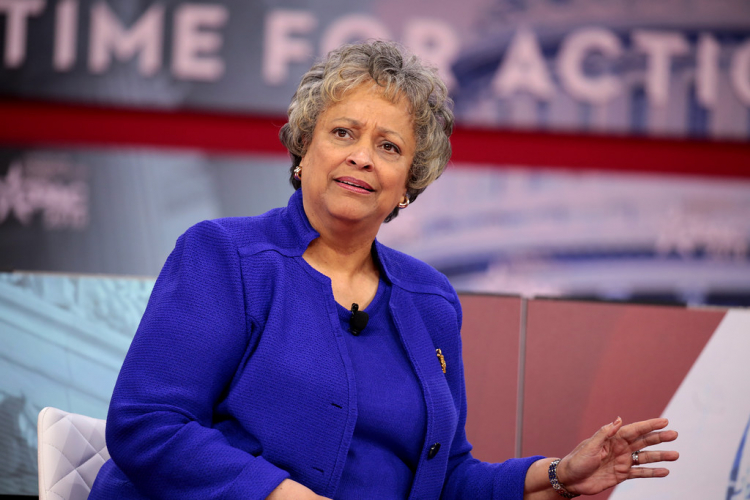 If the disparate, and occasionally warring, tribes of modern conservatism could agree, the closest thing to a united throne would be found in the c-suite on the eighth floor at the Heritage Foundation, the leading think tank on the right that enjoyed increased influence in the Trump era.

But it will soon be empty. Again. Heritage President Kay Coles James announced her resignation Monday afternoon, to the surprise of many. There is no clear successor.

In news first reported by RealClearPolitics, Heritage now must find a new chief executive as the Republican Party searches for its own post-Trump identity. James told close colleagues that she had “informed the Heritage Foundation board that I am committed to a smooth transition.”

“My mother always told me to leave a place a little better than when you found it. I am proud to say that the entire Heritage enterprise is in a much stronger position now than it was in 2018,” the outgoing executive wrote in a resignation letter first obtained by RCP. “I have accomplished the goals I set out to achieve when I first became president.”

It was James who stepped in to help steady the ship after the contentious ouster of former South Carolina Sen. Jim DeMint rattled the organization. She led the search committee on behalf of the board, and after eight months the Bush-era director of the Office of Personnel Management settled on a candidate capable of taking the helm: herself. “We got a good person,” a board member told this reporter at the time. “Harmony reigns.”

There was little public drama three years later when James announced her exit. Unlike the departure of DeMint, staffers didn’t divide into opposing camps to wage a war in the press as the board deliberated. She wrote the resignation letter, and Heritage released a statement. Staffers were still caught by surprise, though, with many asking questions rather than offering details.

Of particular interest to policy wonks and political operatives was the fact that James isn’t leaving alone. Kim Holmes, the executive vice president of the foundation, is also stepping down. “I have greatly valued your friendship and counsel,” Holmes wrote in announcing his parallel resignation, effective April 16, “and wish you all the very best.”

A source with direct knowledge of the situation told RCP that James – who will remain in the job for up to six months, until a successor is found — is leaving on schedule. “She said she would do three to five years. It has been three to five years.”

The job had clear requirements before James took it. “We were Ronald Reagan's favorite think tank,” Ed Feulner, who was the Heritage president from 1977 to 2013, told staffers shaken up by the DeMint defenestration. “And today we are, and will continue to be, Donald Trump's favorite think tank.”

James delivered on that front, telling the New York Times a year into her role that Trump’s administration “is doing quite well in terms of advancing a conservative agenda — clearly, quite well.” Heritage should know: It helped staff the White House and delivered many of its policy papers. By the think tank’s count, Trump implemented two-thirds of its agenda.

And the relationship between Heritage and Trump World has been more than symbiotic. After leaving office, former Vice President Mike Pence took a post at the organization as a distinguished visiting fellow. Many other former Trump staffers have found refuge with “the conservative mothership,” as the foundation likes to call itself. They just don’t know who to call their next president.

“There's not a successor in mind,” a source with direct knowledge of the board’s thinking told RCP. “This is a true six-month window to figure it out.”

That board is expected to meet in April to chart a course forward. Meanwhile conservatives in Washington have a new favorite parlor game: speculating about Heritage’s next leader. Several prominent politicians who would seem to fit the bill were scooped up elsewhere in the last year. Former Wisconsin Gov. Scott Walker now leads Young America’s Foundation; Mark Meadows, Trump’s last chief of staff, recently joined the Conservative Partnership Institute; and Russ Vought, the former OMB director, founded the Center for American Restoration.

Whoever eventually gets the nod, according to a source close to the situation, will have to embrace the organization’s big tent mentality: “The truth is that Heritage has always considered itself, and will always consider itself, a fusionist organization.”

In this vision, preserved through the past two think tank presidents, Heritage would serve as a forum for competing conservative factions to hash out their differences without too much bloodletting or at least not permanent alienation.

Pence could serve as that sort of peacemaker while remaining a presidential candidate in waiting, according to Brian Darling, a Heritage alum and Sen. Rand Paul’s former legal counsel. “If Vice President Pence is keeping the door open to running in 2024,” he told RCP, “he still could helm Heritage and use the next two years to show the stark contrast between conservative and liberal ideas, then take a leave of absence if he decides to throw his hat into the ring.”

A spokeswoman for Pence did not respond to request for comment.

Infighting has been kept at a minimum as conservatives begin life in the minority. They are focused not on ideological flaws of fellow Republicans but on holding back Democrats in the majority. “The person who becomes the next president of The Heritage Foundation,” Darling said, “will be running point against the socialist ideas coming from the White House and congressional Democrats.”

One name floated by staffers inside and outside the building? Mick Mulvaney. The former South Carolina congressman is seen as having respectable pre-and post-Trump credentials. He led the Office of Management and Budget for that president before becoming his chief of staff and then later decamping to serve as special envoy to Northern Ireland.