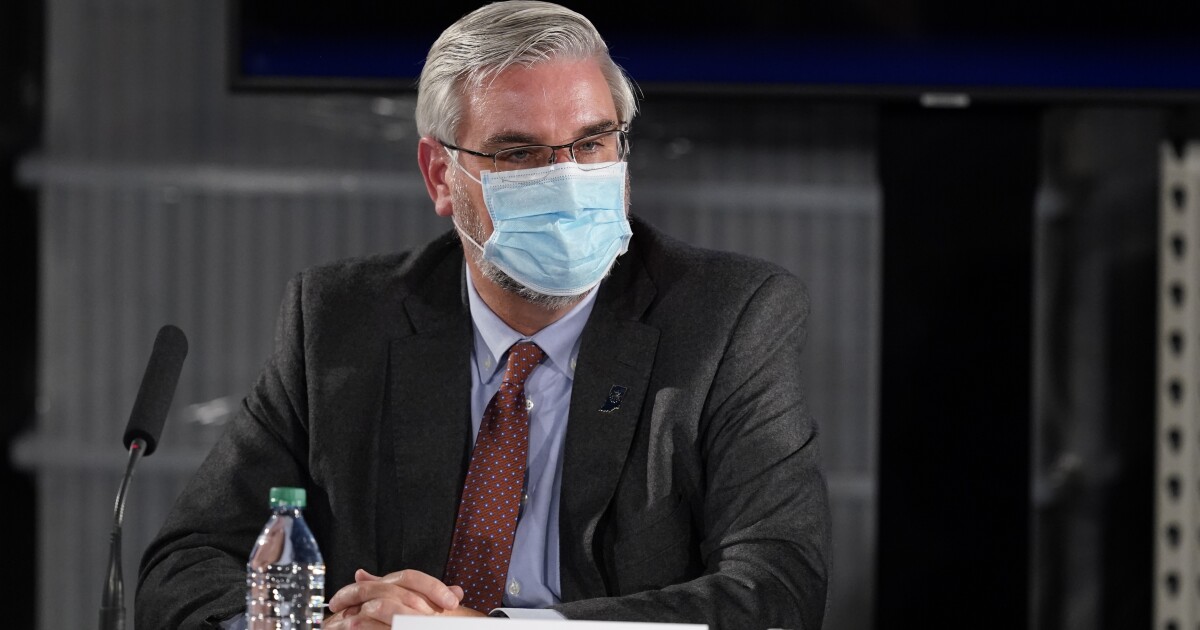 Indiana Gov. Eric Holcomb announced Tuesday he’s rescinding the state mask mandate, which has been in effect since late July 2020, but will extend the state health emergency for another 30 days, through the end of April.

Starting on April 6, the mandate will become a “mask advisory,” he said in a speech that was streamed over the Internet.

But Holcomb didn’t go so far as to encourage an end to all mask-wearing, saying he’s leaving it up to cities and businesses to continue to require mask-wearing, if they so choose.

“As always, local governments, businesses and other entities may impose more stringent guidelines, such as choosing to keep mask-wearing mandatory in their facilities,” he said, mentioning as examples a bank lobby, factory, courthouse or a city hall.

“They retain the authority to make decisions about COVID restrictions for their operations, and should be afforded the respect, compliance and understanding of all who visit them,” he said.

Holcomb went on to say: “When I visit my favorite restaurants or conduct a public event, I will continue to appropriately wear a mask. It’s the right thing to do.”

He said 90% of schools in the state are now operating normally, offering in-person learning, and that most of the remaining 10% of schools are on a hybrid schedule, with some students attending some days of the week and some students the other days.

In the fall, he indicated, all schools in the state are expected to be back to in-person learning as normal.

The governor began his speech by reviewing the actions he took to address the pandemic, which included the Hunker Down Hoosiers order, issued exactly one year ago Tuesday, which forbade residents of the state from leaving their homes except as necessary and forced shut- downs of many businesses, labeling some as “essential” and others as “nonessential.”

Holcomb said actions were taken with an eye toward balancing the “sanctity of life” with health policy decisions and lauded all Hoosiers who had contributed to the effort to keep others safe.

He also lauded his own government, saying, “Your entire state government has come together as a family.”

In announcing he would extend the state health emergency, he cited the need to be able to act quickly to changing circumstances, and also the ability to access federal funds.

State legislators have become increasingly agitated at the governor’s refusal to end the state health emergency, and 29 members of the House of Representatives — more than a third of all Republicans – have signed onto a resolution authored by Rep. J.D. Prescott, R-Union City, that would immediately end the emergency.

HRC 18 was referred to the Rules Committee, but House leaders have not allowed a hearing or discussion on the resolution, indicating that they aren’t willing to risk embarrassing the governor.