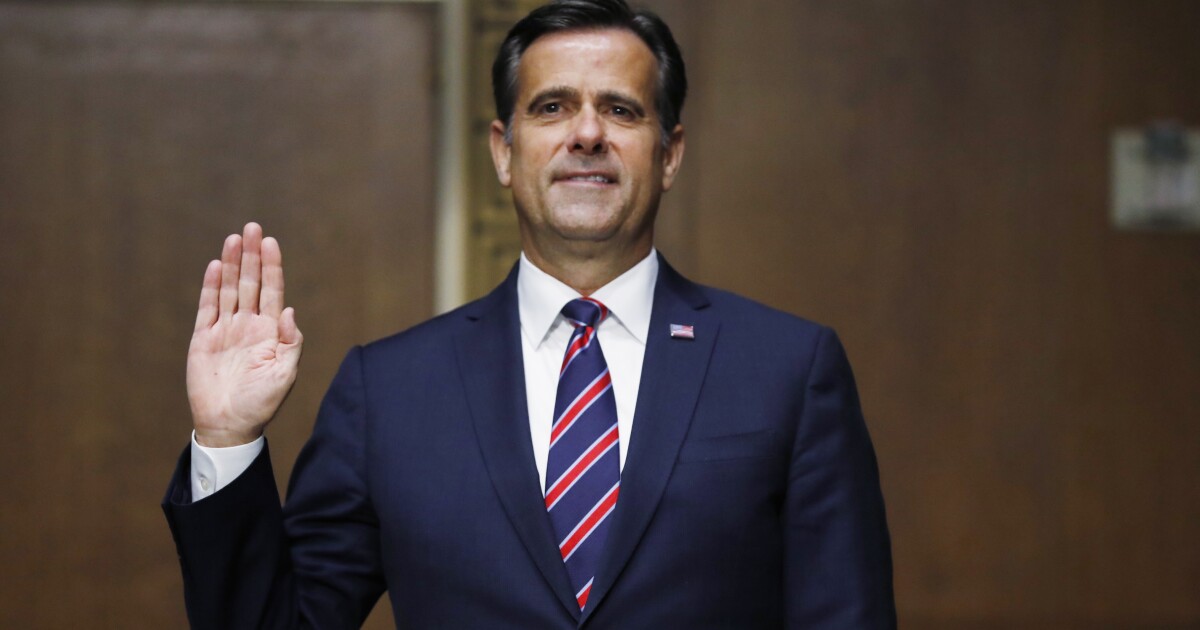 Director of National Intelligence John Ratcliffe isn't ready to concede Joe Biden will take office in January. But “if” he does, President Trump's spy chief says, the Democrat needs to heed the “clear” intelligence showing that China is the “greatest national security threat” facing the United States.

Ratcliffe, a former Texas Republican congressman who has served as the director of national intelligence overseeing the nation’s 17 spy agencies since May, told the Washington Examiner on Thursday that he is speaking publicly now, less than two months before Inauguration Day, so that people will be more fully informed about the geopolitical challenge no matter who is in the White House.

“One country and one country alone, China, aspires to be the world’s superpower and has the resources to do it. So what this administration has done for four years is to try and level the playing field economically with sanctions and through tariffs and identify where they’re stealing intellectual property and through prosecutions and calling out China for who they are on the world stage through Huawei,” Ratcliffe said. “That needs to continue, and I’m hoping that, if the Biden administration takes office, that political arguments and politicizing intelligence can stop, and when the intelligence is so clear that China is increasingly the threat to American supremacy, that we rise to meet the challenge and they continue on the path that this administration has started.”

Ratcliffe repeatedly stressed that Russia and terrorism also pose threats but argued the challenge from China is greater.

“I want to make it real clear in what is a hyperpolitical environment where people are promoting narratives for political reasons and politicizing intelligence and saying things like, ‘Oh, well, actually, Russia is actually a greater national security threat’ or ‘the DNI is falsely equating Russia to China’ — those are arguments that are being made by people who don’t have access to the intelligence that I do, and they’re spinning a false narrative or a political narrative that has not been helpful,” Ratcliffe said. “But now that election is over and I can’t be accused of being political and being pointed with the intelligence, I’ve got it down to where I can classify it and talk about as much of it as I can, and again, the point that I make is that China intends to dominate — economically, militarily, and technologically, they want to replace us as the world’s superpower.”

The spy chief noted he manages an $85 billion budget and said he has shifted those resources to focusing more on China.

“But you have analysts that have been here from the Cold War era and are used to it being Russia, or in the last 20 years, it has been about counterterrorism — and again, I’m not minimizing those — but the greatest threat that we face and a greater amount of our focus needs to be on China,” Ratcliffe said, adding of Russia, “they’re a dangerous adversary, they have a Soviet-era stockpile of nuclear weapons, they’re always going to be a threat. But the people that make the false equations about Russia — the top 10 economies in the world, the United States is No. 1, China is No. 2, and Russia isn’t on the list.”

“Those numbers are out there publicly, and I’ve seen that, again, people who don’t have access to intelligence sort of disputing that,” Ratcliffe said when asked about the 1,000 figure. “A lot of the things relate to that do remain classified, but without getting into the specific numbers, on all fronts, it is consistent with what we’ve seen in China’s quest to replace us.”

Numerous researchers have been arrested for concealing their ties to China’s Thousand Talents program, and the U.S. has arrested scientists, including Harvard’s chemistry department chairman, Charles Lieber, and has publicly charged numerous Chinese hackers while calling attention to China’s efforts to blackmail Chinese Americans. FBI Director Christopher Wray said in July that the FBI has more than 2,000 active investigations traced back to the Chinese government.

The Washington Examiner also learned that Ratcliffe raised concerns about China's influence over digital currencies with the Securities and Exchange Commission. Ratcliffe further detailed his China warnings in an op-ed for the Wall Street Journal on Thursday in which he revealed China targets members of Congress in influence operations with 6 times the frequency of the Russians and 12 times that of Iran.