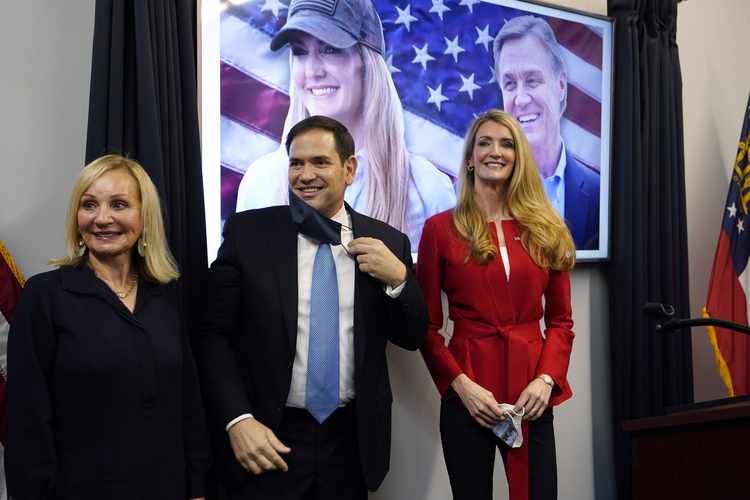 Weeks before the presidential election, some Republican Party leaders were openly fretting that President Trump’s war on mail-in voting could backfire.

“We could lose based on that,” House Minority Leader Kevin McCarthy remarked in early September. Instead of competing with Democrats in mailed ballots amid concerns about the coronavirus pandemic, Trump railed against the practice, blasting it on Twitter as rigged and rife with fraud.

That contempt for the expanded mail-in options had many of Trump’s supporters equally skeptical. Most followed his lead and waited to cast their ballots at the polls on Election Day, making his reelection far more dependent on the one-day turnout.

The country may never know whether instances of voter fraud and other irregularities were limited or so widespread they swayed the election in Joe Biden’s favor. Recounts in several states could offer some clues in the days ahead. Regardless of those outcomes, the warning that Trump and the GOP were shooting themselves in the foot now seems prescient. And as the legal battles play out in slow motion, Republicans are determined not to make the same mail-in voting mistake twice – at least not in the near term.

Georgia’s two Senate runoffs will determine control of the upper chamber and whether Biden could run the legislative table as president. Determined to fight such unfettered Democratic power, conservative groups launching their Georgia ground games are now not only skipping attacks on the mail-in ballot system, they’re determined to drive up turnout from these early voters.

“Early voting and absentee ballots are going to happen. We can’t and shouldn’t stop people from doing it,” said Jessica Anderson, executive director of Heritage Action for America, the political arm of the conservative Heritage Foundation. “What we can do is talk to Republicans [in Georgia] about having a plan to vote.”

If GOP campaigns and activists reach out to Republicans early, they can encourage them to make voting plans that work best for them, Anderson added. As of Monday, Heritage Action already had activists on the ground, door-knocking, making phone calls and texting likely voters. It plans to knock on 500,000 doors, make a million phone calls and send more than 500,000 texts ahead of the runoff election.

“The first wave of priority will be the [hundreds of thousands] of Georgia voters signed up to receive a mail-in ballot,” Anderson told RealClearPolitics. “We will be making the first rounds of door knocks for them and follow it up with text messages.”

Heritage Action is one of several conservative groups that have launched extensive ground operations in the Peach State this week to help Sens. David Perdue and Kelly Loeffler hold on to their seats. Both were forced into Jan. 5 runoffs against their Democratic opponents when none of the candidates topped 50% support.

The focus on early voters doesn’t discount Trump’s complaints that mail-in ballots are a “whole big scam” to pump up the Democratic tally. Anderson said she would like to put together a team of at least 100 poll workers to watch for any attempts to manipulate election results.

Jenny Beth Martin, president of Tea Party Patriots Citizens Fund, said her group plans to provide training for poll workers and watchers “so we can have confidence in the outcomes.”

“We will be engaging in precinct operations and both volunteer and paid messaging to targeted voters,” she told RCP.

Prominent Republicans, including Perdue and Loeffler, continue to suggest that the Nov. 3 election was riddled with irregularities and computer tabulation errors, arguments that no doubt energize a GOP base loyal to Trump amid his fight for a second term.

Georgia, a reliably red state in recent years, appears to have given Biden an approximately 14,000-vote edge over the president with nearly all ballots counted. Meanwhile, Loeffler’s and Perdue’s failure to receive 50%-plus-1 votes rattled national Republicans and has thrown control of the Senate in doubt. (State election official on Wednesday announced a recount of presidential election results, which will be done in each county by hand.)

In the special election to replace Sen. Johnny Isakson, Loeffler won 25.94% of the vote, and Democrat candidate Raphael Warnock garnered 32.89%. Loeffler was forced to share GOP votes with the popular Rep. Doug Collins while competing with three other Republican candidates. Warnock was the top Democrat to emerge from the pack of seven competing for the seat.

Perdue’s Senate reelection hit a snag when Libertarian candidate Shane Hazel siphoned off enough votes so that neither Perdue nor his Democratic challenger, Jon Ossoff, cleared the 50% threshold.

Familiar themes focused on turning out each party’s base are already emerging in the runoff. As Democrats, the national media and even international leaders acknowledge a Biden win, Republicans are casting the Senate races as their last line of defense against a far-left Democratic agenda, once again invoking the socialist label to drive home their warnings.

Over the last few days, Georgia has become the center of the political universe as parties and outside groups have poured massive amounts of money and other resources into the state. Perdue’s campaign earlier this week announced that it had purchased $10 million worth of ad buys.

The state is also quickly becoming a proving ground for possible 2024 GOP presidential contenders. Sen. Marco Rubio of Florida held a rally for Loeffler and Perdue in Marietta on Wednesday. At the event, Rubio reprised the warnings of the presidential campaign – that Democrats would impose a socialist order and advocate a “crazy” agenda that includes rioting, threats to free speech and defunding the police.

Rubio said that after Florida’s big win for Trump last week, Democrats were questioning why Latinos in the state, with its large Cuban and Venezuelan immigrant communities, would back the president. To Rubio, a Cuban American himself, the reason is simple:

“You know, [they say] I got on a boat, I left everything behind. I risked being eaten by a shark to get away from socialism. Why in the world would I want to bring that here now?”

Loeffler also hit on that theme. “The road to socialism does not run through Georgia,” she said, before quoting Schumer’s remark. “… Chuck Schumer, Nancy Pelosi, you’re not going to take Georgia. It’s ours.”

Vice President Mike Pence, who may also vie for the presidency in four years, plans to be in the state next week. Sen. Tom Cotton of Arkansas, another potential GOP contender, is headed there in the coming days, along with Sens. Rick Scott of Florida and Tim Scott of South Carolina.

Meanwhile, Georgia Democrats are clamoring for a visit from former President Barack Obama and former first lady Michelle Obama. But they argue that an appearance from Biden really isn’t necessary, and besides, he has to get busy working on his White House transition and putting together a Cabinet.

Biden may be able to skip a visit to the state in the coming weeks but Ossoff and Warnock are not shying away from Biden’s main campaign messaging – the need to expand health care access while blaming Trump and his GOP allies for failing to mitigate the spread of the coronavirus.

The Ossoff camp released the first ad of the runoff late last week, shortly after a cable network projected a Biden victory. “The path to recovery is clear,” the ad asserts. “First, we listen to medical experts to control this virus. Then we shore up our economy with stronger support for small businesses and tax relief for working families.”

The new onslaught of ads and visits from Republican surrogates is already capturing most of the headlines, but party operatives and activists are focused on the detailed turnout operations that often determine close elections.

Alfred Johnson, CEO of Mobilize.us, a platform that helps liberal groups organize, told reporters Wednesday that left-wing activists were still reaching out to voters in heavily contested states, mostly to help them “cure” any problems with how their ballots were filled out. But he also said numerous liberal groups have spent the last few days reaching out to Georgia voters to build on the community organizing work of Stacey Abrams, the voting rights activist and losing candidate for governor in 2018.

In the wake of the presidential election, Democrats have credited Abrams’ focus on turning out Democratic voters and expanding mail-in options as instrumental in making Georgia an unexpected battleground.

“That joint Senate race will be one of the largest mobilization efforts in a state that has ever been seen before,” Johnson said.

Swing Left, a group founded in 2016 to help Democrats volunteer in their nearest swing district, said it sent about 2 million Democratic voter contacts in the state to help Ossoff and Warnock before Nov. 3 and will remain active.

“Georgia is a great example of how Stacey Abrams … and a lot of community organizations on the ground really have done multi-cycle and multi-year work to really build that progressive infrastructure to turn out the numbers that we needed to flip a state like Georgia,” said Tori Taylor, Swing Left’s co-executive director.

Conservative groups are aiming to counter those moves. Club for Growth Action, a pro-supply side super PAC, plans to spend at least $10 million on a ground game to help elect Perdue and Loeffler. The group has formed the Save America Coalition, working with Heritage Action, FreedomWorks, the Susan B. Anthony List and Tea Party Patriots. The group will run digital ads, some focused on early voting, and also plans a bus tour throughout the state. The coalition has enlisted the help of several GOP senators, including Rubio, Marsha Blackburn, Ted Cruz, Steve Daines, Josh Hawley, Ron Johnson, Mike Lee, and Pat Toomey. Former South Carolina Sen. Jim DeMint is also involved.

The push to turn out Republicans in early voting will certainly be key, he noted. “Especially in these close elections, you should never leave votes on the table, and that includes an early voting strategy.”