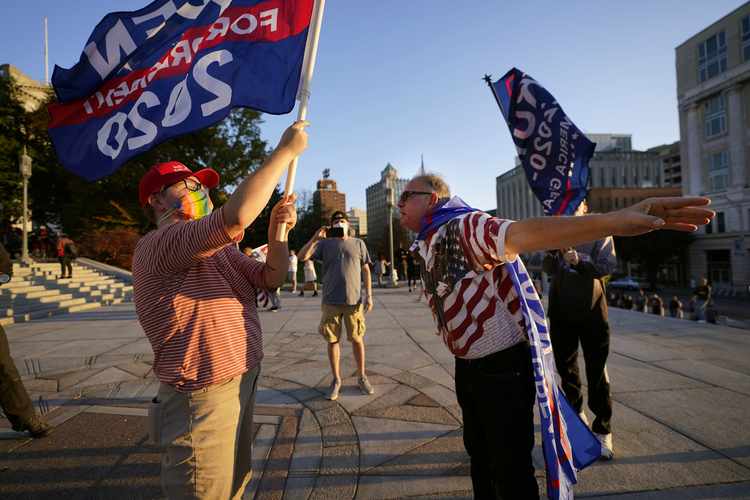 In Pennsylvania, many Republicans are skipping the political autopsy of Donald Trump’s narrow presidential loss to Joe Biden – still contested in court by the president’s team – and celebrating the party’s resurgence in down-ballot races.

Before Election Day, the state GOP’s electoral prospects seemed unclear, but then Pennsylvanians – again showing their mercurial voting patterns – delivered for Republican incumbents and candidates, particularly those with centrist views. “It was sort of the anti-wave election in Pennsylvania,” said Christopher Borick, director of Muhlenberg College’s Institute of Public Opinion. This outcome benefitted Republicans but also spared numerous Democrats. It suggests that Republicans and Democrats confront a nuanced post-Trump map in the Keystone State.

Philadelphia’s suburbs fueled the winning margins for Biden, who, long ago, crafted the image of loyal Democrat but approachable centrist. This persona was viewed as a calming one for suburban voters, who punished Republicans with historic losses during the Trump era. Their endorsement of Biden, though, didn’t lead to down-ballot Democratic success – as evidenced by Democrats’ performance in state legislative and row-office races.

As it stands, Republicans will retain their majority in the state Senate, which the party has controlled since 1994. The GOP will also maintain its state House majority, secured in 2010. In addition, for the first time in over two decades, a Republican won the state auditor general race. And the upset loss of the state treasurer marked the first time since 1994 that a GOP candidate defeated an incumbent Democratic statewide elected official.

The suburbs, it turns out, played an important role in Republicans’ fortunes – a development that defies recent trends. In suburban Philadelphia, for example, Republicans retained state House seats and even gained one in Bucks County. In the Democratic-leaning Harrisburg area, an incumbent GOP state senator – considered an underdog – won a second term. And in suburban Pittsburgh, Republicans retained the state House seat held by former GOP House Speaker Mike Turzai, who retired this year. The party even managed to oust Allegheny County’s Frank Dermody, the Democratic House minority leader who had represented his district since 1991.

In many instances, down-ballot Republicans succeeded by reflecting their district’s values and political temperament. Todd Stephens, for instance, cited the importance of constituent service in his state House victory in Montgomery County, which Trump lost by 26 points. “The voters are looking at each race independently,” Stephens told a PBS affiliate. “So just because they reject Donald Trump’s policies at the top of the ticket, doesn’t mean that they don’t embrace the things that I’ve been doing down at the bottom of the ballot.”

Meantime, in pro-Trump Schuylkill County, Tim Twardzik ran on hometown values. “This is the place that gave us our values,” he said earlier this year. “Around us are the churches where we took our first steps of faith. It’s where we learned that life wasn’t just about us. It was about service, about giving our lives to something bigger than ourselves.” This month, Twardzik became the first Republican to win his legislative district since it was created in 1969.

This winning formula – combined with political demography – also applied to members of both parties in Pennsylvania’s congressional delegation, which didn’t have any flipped races. In the 1st District – centered around Bucks, a suburban bellwether in presidential politics – Republican Rep. Brian Fitzpatrick easily won a third term by remaining an independent-minded moderate. In south central Pennsylvania’s 10th District, GOP Rep. Scott Perry – viewed as a potential casualty of the region’s suburban voters – benefitted from conservative places like York County, which dramatically favored Trump. And in northeastern Pennsylvania’s 8th District, Democratic Rep. Matt Cartwright – a Medicare For All supporter who fought charges that he’d defund police – prevailed with the backing of stalwart Democrats in Scranton, Biden’s hometown.

If anything, post-Trump, Republicans and Democrats must navigate hostile terrain within their own parties. “Pennsylvanians aren’t necessarily buying the brand of either party,” said Borick. “The landscape that was created by Trump wasn’t guaranteed for Republicans in the places where they made gains and it’s not guaranteed for Democrats where they performed well,” he added. In the Democrats’ case, the party faces suburban voters who may not punish Republicans in the future. After all, leftist policies offend the moderate sensibilities of many suburbanites, including in Chester County, which trended Republican before Trump.

Rep. Conor Lamb, who won another term in suburban Pittsburgh’s 17th District, has noted that progressive politics will lead to backlash in Trump-friendly places where traditional Democrats still abound. “I’m giving you an honest account of what I’m hearing from my own constituents, which is that they are extremely frustrated by the message of defunding the police and banning fracking,” Lamb recently told the New York Times. “I, as a Democrat, am just as frustrated. Because those things aren’t just unpopular, they’re completely unrealistic, and they aren’t going to happen.”

But future challenges aren’t limited to Democrats. In the case of Republicans, the party must listen to its growing working-class base, particularly in historically Democratic counties. In 2016 and 2020, many voters in places like Luzerne County cast their ballots for Trump, not the GOP. In the past, the party’s economic policies often conflicted with the interests of Luzerne voters, who also rejected Democrats’ leftward turn on cultural issues. Trump, in their eyes, was a liberating break from both parties’ orthodoxies – and a rejection of the Bush and Obama eras. Now, these voters are despondent and question the 2020 election’s result. The media’s often-derisive portrayal of them only intensifies their resentment. In future elections, Republicans could face a scenario where disillusioned blue-collar voters just stay home.

For now, though, Pennsylvania’s electoral future favors the Republican Party, which has enjoyed surging voter registration numbers. The party’s hold of the state legislature, moreover, will be crucial in the upcoming redistricting fight. In the 2022 midterms – which traditionally favor the opposing party of a first-term president – Pennsylvania will have an open Senate seat and a gubernatorial race. In the past, moderate Republicans, from Arlen Specter to John Heinz, have held Senate seats. Voters statewide, wearied by Democratic Gov. Tom Wolf’s progressivism and coronavirus policies, could turn to a GOP alternative. Time will tell how both parties respond to their evolving coalitions and adapt to Pennsylvania’s ongoing realignment.