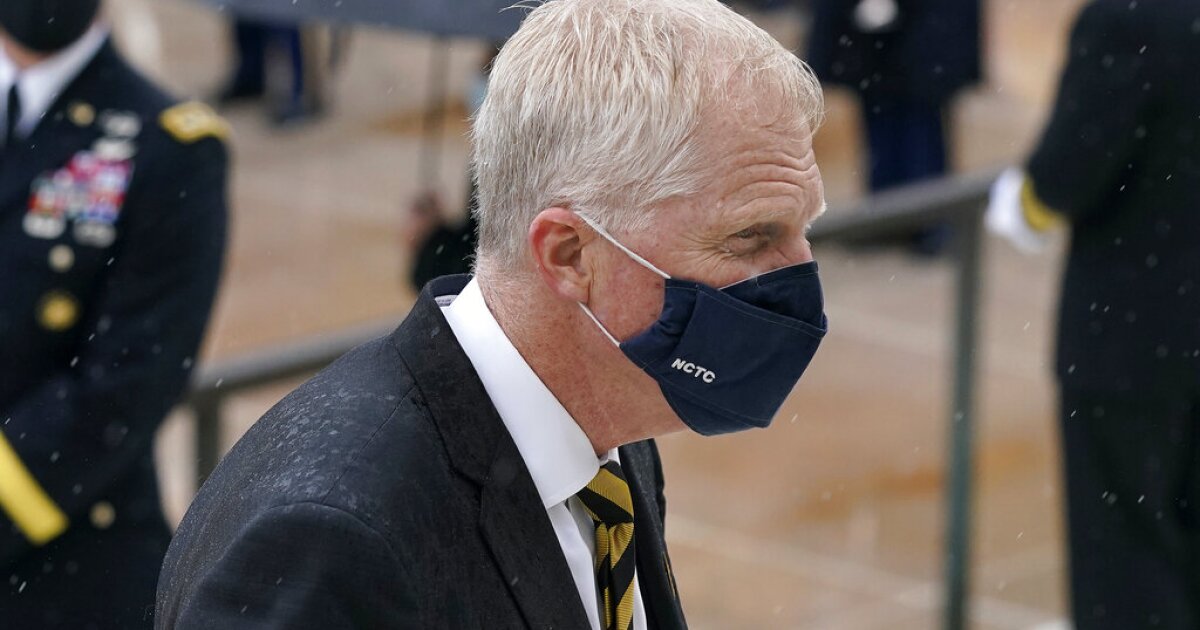 The Pentagon’s new acting chief praised U.S. military service members for their sacrifices and for their successes in combating terrorism, and suggested he would be focused on helping wind down the war in Afghanistan, writing that “all wars must end” and “it’s time to come home.”

Christopher Miller, who had been the Director of the National Counterterrorism Center until Trump selected him as the acting secretary of defense following Mark Esper’s firing this week, released a two-page letter Friday night, sending a message that the recent Pentagon shake-up might result in the hastening of the fulfillment of one of Trump’s longtime campaign promises to bring troops home from Afghanistan.

“As we prepare for the future, we remain committed to finishing the war that Al-Qaeda brought to our shores in 2001. This war isn’t over. We are on the verge of defeating Al-Qaeda and its associates, but we must avoid our past strategic error of failing to see the fight through to the finish,” Miller wrote. “Indeed, this fight has been long, our sacrifices have been enormous, and many are wear of war — I’m one of them — but this is the critical phase in which we transition our efforts from a leadership to a supporting role. We are not a people of perpetual war — it is the antithesis of everything for which we stand and for which our ancestors fought. All wars must end. Ending wars requires compromise and partnership. We met the challenge; we gave it our all. Now, it’s time to come home.”

A White House official had told the Washington Examiner earlier this week that the new Pentagon leadership would help Trump fulfill his foreign policy agenda, saying of Trump, “He wants to bring the troops home. He wants to end the wars.”

Discussing Trump’s moves at the Pentagon, which included bringing in a number of Trump-allied officials into key Pentagon positions over the past week, the New York Times reported Friday that “there is one goal he has nurtured since the 2016 campaign: withdrawing all American troops from Afghanistan” and that “Trump is scrambling to make it so, aided by conservative antiwar forces who see it not only as good policy but also as a linchpin to any future he may seek in politics.”

William Ruger, the vice president for research and policy at the Charles Koch Institute who was appointed by Trump to be the U.S. ambassador to Afghanistan in September, told the New York Times that “the president has had difficulty finding personnel who would faithfully execute on his preferences” but, because of the new Defense Department leadership, “the president could really cement a legacy here” and “could be the leader who ends America’s longest war.”

Trump said Oct. 7 that “we should have the small remaining number of our BRAVE Men and Women serving in Afghanistan home by Christmas!”

However, he faced pushback on that from a number of top generals and, reportedly, from Esper too. Troop levels in the war-torn nation have been lowered down to roughly 4,500 as the United States pursues a troubled deal with the Taliban.

Esper, who had resisted Trump’s desire to use U.S. troops to help quell the violence and rioting that accompanied protests in cities this summer, gave an interview to Military Times in which he seemed to admit that he had tried to finesse how he handled Trump’s desires. When asked about withdrawal from Afghanistan, Esper replied, “It may be a little bit uncertain for some folks, but I know the chain of command completely knows what we’re doing and where we’re going.”

National security adviser Robert O’Brien, who had been Trump's special envoy for hostage affairs, said in early October that he supports a plan to draw down U.S. troops to 2,500 in Afghanistan by January and then to zero by May.

But U.S. Army Gen. Mark Milley, the chairman of the Joint Chiefs of Staff, pushed back on this a few days later, telling NPR: “I think that, you know, Robert O’Brien or anyone else can speculate as they see fit … I’m going to engage in the rigorous analysis of the situation based on the conditions and the plans that I am aware of and my conversations with the president.”

O’Brien stood by his remarks a few days later during a discussion with the Aspen Institute.

Miller, a former Army Green Beret who did tours in Iraq and Afghanistan, testified to Congress in September that “al-Qaeda’s presence in Afghanistan has been reduced to a few dozen fighters who are primarily focused on their survival.”

The Pentagon's inspector general concluded earlier in 2020 that the Taliban was “reluctant to publicly break with al-Qaeda.”

Edmund Fitton-Brown, the coordinator of the U.N.’s Islamic State, Al-Qaeda, and Taliban Monitoring Team, said in October that “Al-Qaeda are heavily embedded with the Taliban.” And Thomas Jocelyn of the Long War Journal told the Washington Examiner that “Al-Qaeda's men are waging jihad alongside their Taliban blood brothers” and that “time may have run out on the U.S. presence, but there's no good reason to whitewash the Taliban on the way out the door.”

The State Department and the Taliban struck a shaky peace agreement in February, although the Taliban has stepped up its fight against the Afghan government since then.

“To all of our Soldiers, Sailors, Airmen, Marines, Coast Guardsmen, Space Professionals, and civilians: Continue to be bold,” Miller wrote on Friday. “Continue to be courageous. Continue to set the example of selfless service that is the envy of the world and an example for our citizens. Our tasks are not easy. The burden is great. But together we will take our Nation to new heights.”