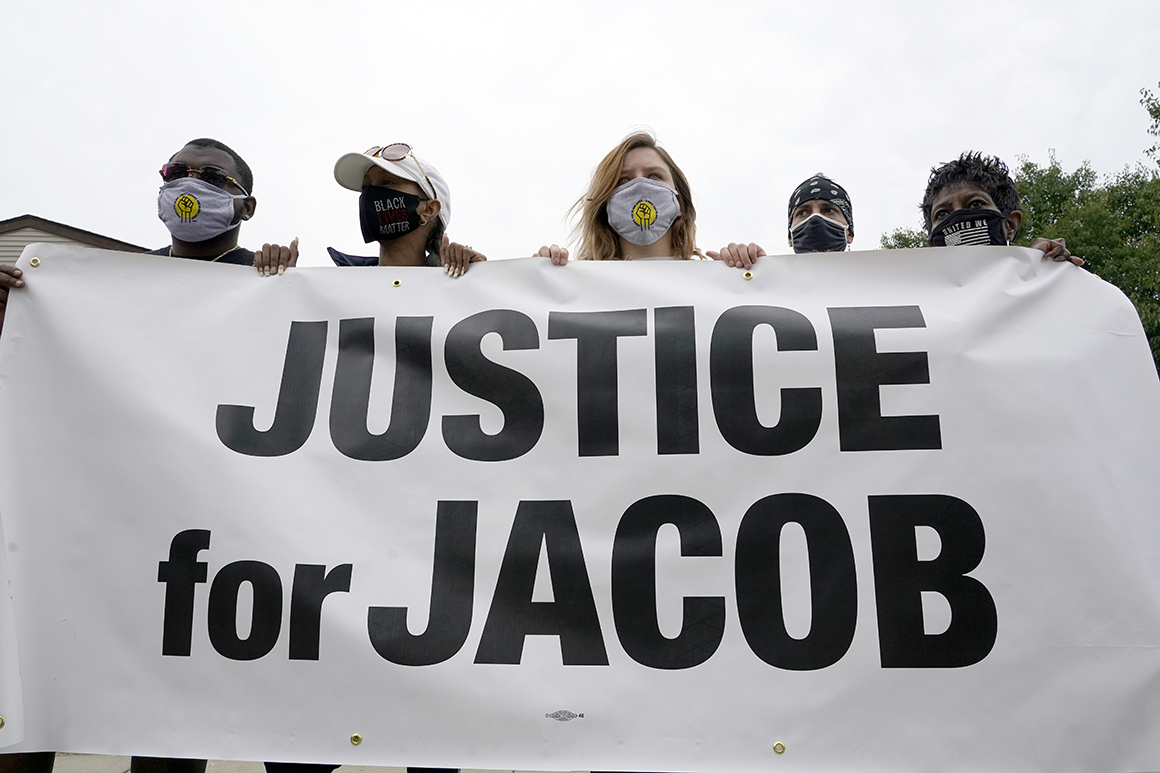 He added: “I do not believe the state … would be able to prove that the privilege of self-defense is not available.”

Graveley said he had informed Blake of the news before a news conference to announce the decision.

The Blake shooting happened three months after George Floyd died while being restrained by police officers in Minneapolis, a death that was captured on bystander video and sparked outrage and protests that spread across the United States and beyond. The galvanized Black Lives Matter movement put a spotlight on inequitable policing and became a fault line in politics, with President Donald Trump criticizing protesters and aggressively pressing a law-and-order message that he sought to capitalize on in Wisconsin and other swing states.

Kenosha, a city of 100,000 on the Wisconsin-Illinois border about 60 miles north of Chicago, was braced for renewed protests ahead of the charges, with concrete barricades and metal fencing surrounded the Kenosha County Courthouse and plywood protecting many businesses. The Common Council on Monday night unanimously approved an emergency resolution giving the mayor the power to impose curfews, among other things, and Gov. Tony Evers activated 500 National Guard troops to assist.

Sheskey was among officers responding to a woman who had reported her boyfriend was not supposed to be around. Cellphone video shows Blake walking to the driver-side door of an SUV as officers follow him with guns drawn, shouting. As Blake opens the door and leans into the SUV, Sheskey grabs his shirt from behind and opens fire.

The Kenosha police union said Blake was armed with a knife, and Sheskey ordered him several times to drop it but he would not. Sheskey’s attorney, Brendan Matthews, said Sheskey fired because Blake started turning toward the officer while holding a knife.

State investigators had said only that officers saw a knife on the floor of the SUV and hadn’t said whether Blake threatened anyone with it. The officers were not equipped with body cameras.

Sheskey, 31, has been the subject of five internal investigations since he joined the Kenosha department in 2013, including three reprimands for crashing his squad car three times over three years. He has also earned 16 awards, letters or formal commendations, his personnel file shows.

The state Department of Justice investigated the shooting under a state law that requires outside agencies to investigate all officer-involved incidents. The department asked former Madison Police Chief Noble Wray, who is Black, to review its findings after Graveley asked for an outside expert to review the investigation.

Rittenhouse, who was among armed people who took to Kenosha streets during the violence and said he was there to help protect businesses, faces multiple charges including intentional homicide. Bystander video showed Rittenhouse shooting Joseph Rosenbaum and Anthony Huber and wounding a third man. Rittenhouse, who is white, has claimed the three men attacked him and he fired in self-defense. Conservatives across the country have been raising money for his legal team. Rittenhouse was 17 at the time of the shooting.

Rittenhouse pleaded not guilty to all charges at a hearing Tuesday.

Prosecutors dropped a sexual assault charge against Blake in November as part of deal in which he pleaded guilty to two misdemeanor counts of disorderly conduct. He was sentenced to two years’ probation.