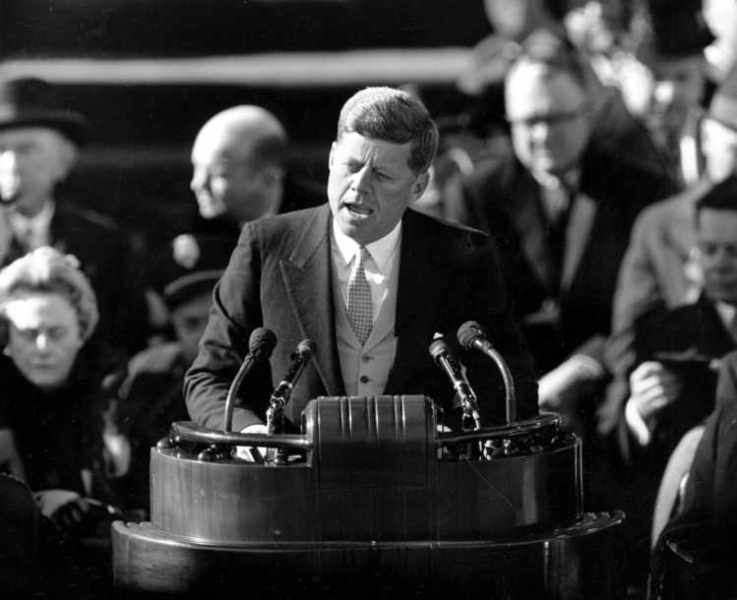 I was 10 when my fifth grade classmates and I trudged through the snow to my house next to the school. My house was convenient for classes to watch historic moments. It was before classrooms had televisions or smart boards or Internet streaming. And one year later, in that same knotty-pine-paneled basement rec room we watched in wonder and excitement as a voice counted down and John Glenn was launched into space.

But on this particular day, a cold January day, we watched, sitting on the floor. We fidgeted as 10-year-olds do. And a man a thousand miles away approached the podium. I remember noticing that many men on that platform wore top hats, which seemed very odd and old-fashioned. But this young man wore no hat. He spoke to us from out of that small black-and-white television before us: “And so my fellow Americans, ask not what your country can do for you…”

Then, as the president sat down, a very old man walked to the podium. We did not know who he was. He had the most wonderful craggy face, the whitest shock of hair. He was hatless, too. But in that brilliant sunlight, the old man could not see clearly, could not make out the words of the poem on the white paper before him. On the spur of the moment, to rescue it and himself, Robert Frost recited from memory another of his poems the young president had told him he loved, speaking of America:

“Such as she was, such as she would become, has become, and what she will become.”

Last week, on another brilliant, cold January day, exactly 60 years later, I watched a man for whom I had worked for 26 years step forward and become the oldest president ever to deliver an inaugural address. I can’t describe the feeling – I was perhaps as much in wonder as I had been as a 10-year-old listening to the young John F. Kennedy. “We must end this uncivil war,” said Joseph R. Biden. “We can do this if we open our souls instead of hardening our hearts.”

A good friend, someone I admire a lot, shared with me “word clouds” he had created of inaugural addresses. In a “word cloud,” the words that are spoken most move forward as the largest in a cluster of words. It tells us in important ways what words were the most important to the speaker.

And I loved when my friend told me that the word President Biden used the most often in his inaugural address was a word of one syllable — just three letters: “all.” Of course it was. Because Joe Biden will give his all. I know that. And he will care, night and day, to make of us the best we all can be.

Then my friend told me something that stopped me cold. He said, “Joe, guess what word Abraham Lincoln spoke the most often in his first inaugural address, on the day he faced the crisis of a country torn apart? The word was ‘all.’ He used the word ‘all’ the most.”

And why does that not surprise us? Then, last week we also watched and listened as the youngest poet ever to be chosen rose to recite an inaugural poem. Amanda Gorman, 22 years old.

That is what I will never forget. How that young man, hatless in the cold, made me feel. How President Biden, whose courage I admire so much, made me feel. And how the boldness in the words and delivery of that remarkable young woman made me feel.

Looking back, if there is something Joe Biden has taught me, it’s this: It is always about family. And in Joe Biden’s world that means two things: There is nothing more important than family; and to Joe Biden, family includes every human being he encounters. All of us.