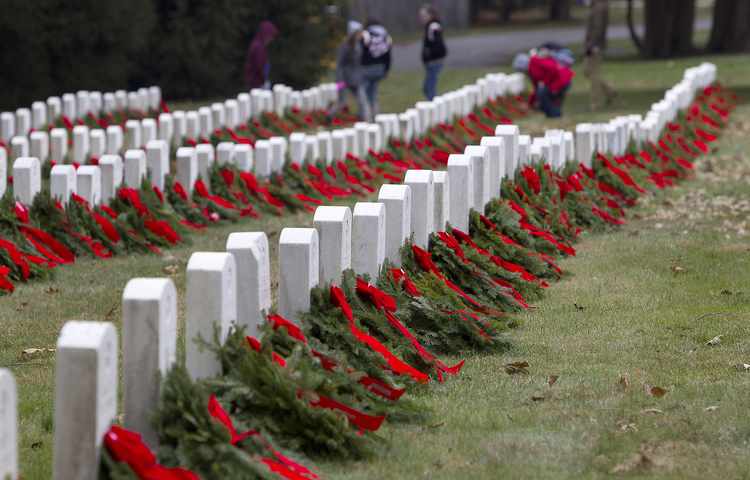 In the summer of 1865, Atlantic Monthly correspondent J.T. Trowbridge visited the battlefield at Gettysburg, two years after the brutal fighting over three sultry July days had reversed seasons of Northern losses in the Civil War, turning a divided nation back toward re-unification.

Trowbridge was surprised at how quiet the rocky ridges and rolling fields were on a “soft and peaceful” summer day. The guns had finally gone silent at Appomattox a few weeks before, and Trowbridge was touring battlefields for a fresh retrospective about a war that had taken more than 600,000 American lives, and left tens of thousands more maimed for life.

To Trowbridge, Gettysburg was two places. A surface serenity seemed to hide so much beneath it, in the stories of scores upon scores of dead men in graves that that summer were finally being adorned with headstones.

Trowbridge wrote that only a summer symphony of locusts and the “perpetual click of the stone cutters, at work on the granite headstones of the cemetery,” interrupted the silence of fields where men had given their “last full measure of devotion,” in the famous words of Abraham Lincoln.

Trowbridge wrote of his visit as if he were trespassing. President Lincoln had expressed similar feelings of awe and inadequacy when he delivered the Gettysburg Address three-and-a-half months after the battle. The war correspondents who witnessed and chronicled the epic fighting of July 1-3, 1863, had similar flows of emotions washing over them, simultaneously awestruck over what they had witnessed, but also self-doubting of their abilities to capture the significance of the savage fighting at the high-water mark of the Confederacy, and all that it meant toward ending the evil of slavery and the treason of secession.

At Gettysburg, Trowbridge was overwhelmed with questions and doubts. How did these men end up here, in this time, in bloody conflict, dying in swaths on placidly named fields like the Peach Orchard and the Wheat Field, or in horrific warrens of infamy, like Devil’s Den? Why them, why here?

As he looked into graves that were being partially unearthed to allow for the placement of new headstones, he felt as if history, itself, was peeling back, a feeling so overwhelming that it made him search for reassurance of his own humanity.

“We indulge in pious commonplaces, ‘They have gone onto a better world, they have their reward,’ and the like,” Trowbridge later wrote. “No doubt this is true; if not, then life is a mockery, and hope a lie.”

Like no other place, I feel this sense of awe and unworthiness every time I visit Gettysburg. It began with research for my book, “Imperfect Union,” about New York Times correspondent Sam Wilkeson and his soldier son, Bayard, whose shared fates merged in one final soul-searing moment of intimacy on the grounds of the Adams County poorhouse, where the wounded boy had been carried to die. If the supreme courage and sacrifice exhibited at Gettysburg is not proof that there are causes greater than oneself, causes worth risking everything for, then what are we on this earth for?

And so, I believe Gettysburg is a place where all Americans are trespassers on the place that Lincoln extolled so humbly, and sparingly, in his two-minute Gettysburg Address.

These are feelings which compel me to implore future politicians to not use Gettysburg as a symbolic stage for political speeches, as Joe Biden did in October, and for political stunts like the farcical “hearing” a month later by Donald Trump’s flailing legal acolytes. The appropriation of this sacred ground for partisan political events shows how far we must go in the quest for a more perfect union.

Lincoln, a humble president, felt this sense of sacredness and inadequacy earlier and more earnestly than anyone in public office, then or now.

But the newspaper correspondents who wrote on-deadline battle dispatches for America’s newspapers first had that awe toward unselfish purpose in the very hours after the fighting stopped. They knew, and wrote, that this was like no other fight they’d covered over two-plus years. I agree with Lincoln historian Harold Holzer that Lincoln appropriated significant threads the New York Times’ Wilkeson’s imagery and word cues for the Gettysburg Address. Wilkeson was one of the most famous reporters of his time, and his battlefield dispatch, written at the freshly dug grave of his oldest son, still gives me chills. It was a stunning piece of journalism, steeped in his own sorrow, self-expressed inadequacies of being able to fully describe the savage sacrifice of what he’d just witnessed, and his devotion to getting it right for history and posterity.

“Who can write the history?” of such an epic clash, Wilkeson wrote for the July 5, 1863 edition of his newspaper, a story in which he later declared that “young and bold blood” had just set forth “a second birth of freedom.”

Lincoln’s Gettysburg Address several weeks later turned that latter phrase to “new birth of freedom.” Like Wilkeson’s New York Times story, Lincoln’s address was also tethered to the same belief that only those who died or were wounded for life here had the ultimate right to define what it meant.

“We cannot dedicate – we cannot consecrate – we cannot hallow – this ground,” Lincoln said. “The brave men, living and dead, who struggled here, have consecrated it far above our poor power to add or detract.”

Lincoln wasn’t even supposed to be the featured speaker of that Nov. 19, 1863, ceremony. The organizers asked for a “few appropriate remarks” to follow what would turn into a two-hour stemwinder from Massachusetts politician Edward Everett. When Lincoln sat down after speaking for two minutes, the ending was so abrupt it startled correspondents and thwarted photographers from getting anything but a grainy image.

We have lived four years in which unbridled hubris and petty partisanship have replaced governing, presided over by a president who equates royalty-like fealty to him with patriotism, and who seems to have little interest in Lincoln except for when a worshipful tweeter tries to compare the two presidents.

That Rudy Giuliani-led stunt at Gettysburg to question the validity of Pennsylvania’s narrow vote for Biden was a desecration of the memory of the men buried there. One man’s fantasies of grievance and grandiosity is exactly the opposite of the cause so many died for, acts that Lincoln, himself, felt unworthy of fully comprehending.

“History will record the shameful irony that a president who lied to avoid military service staged a bogus event on the hallowed grounds of Gettysburg in a brazen attempt to undermine the Republic for which scores of real patriots had fought and died to preserve since its founding,” tweeted Tom Ridge, the former governor of Pennsylvania and ex-Homeland Security head.

Biden’s speech there in October – an appeal for unity – delivered a message few could disagree with.

“There is no more fitting place than here today in Gettysburg to talk about the cost of division – about how much it has cost America in the past, about how much it is costing us now, and about why I believe in this moment we must come together as a nation,” Biden said.

But I still question Biden’s use of that sacred ground in the middle of one of the most bitter elections in American history. While coming with a unifying message, the speech was clearly designed to show how Biden differed from an incumbent who has seemed more bent on provoking disunity and exploiting the destruction of institutions than bringing the country together.

Next time, go to the Statue of Liberty or Mount Rushmore if you want to issue a clarion call for unity. In future political campaigns, can we agree to allow the men who gave that last full measure to just rest in peace?

Chuck Raasch was a national correspondent for USA TODAY and Gannett from 1982-2013, and later was the Washington correspondent for the St Louis Post-Dispatch. He is the author of the nonfiction book about Civil War correspondent Sam Wilkeson, “Imperfect Union: A Father's Search for His Son in the Aftermath of the Battle of Gettysburg.”