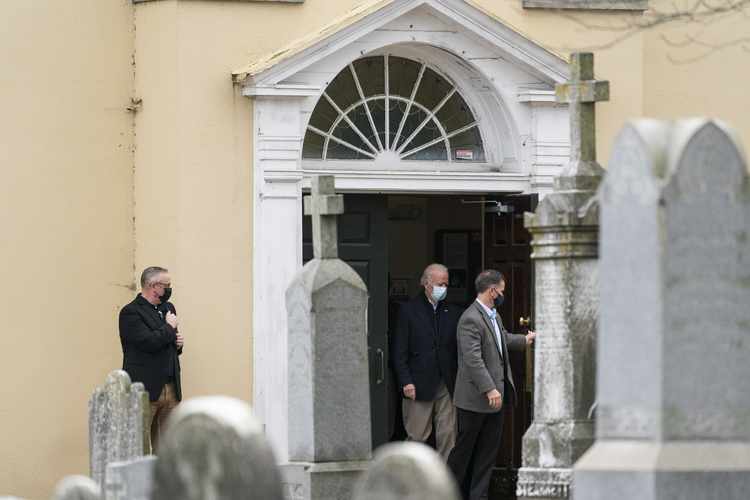 The tumultuous 2020 presidential campaign, more so than any other in recent decades, produced a tug-of-war over religious voters with intense interest in whether President-elect Joe Biden could coax them out of the Trump camp.

Exit polls showed evangelical Christians, a linchpin of Donald Trump’s 2016 victory, still overwhelmingly broke for him. But self-identifying Catholics – those attending Mass regularly mixed in with those who don’t — split almost evenly between the two candidates, according to AP Votecast.

Supporters of Biden, a life-long Catholic who speaks often about his faith, argue he won over religious voters by emphasizing character, moral decency and the need to restore the “soul of America” after Trump’s chaotic, combative leadership.

Team Trump has dismissed that attempt to lay claim to these voters. The president and his backers point to a long list of actions he took to promote and protect the right to exercise one’s religion of choice free of government constraints, including leading the charge to strike down the Obamacare contraception mandate that many Catholic groups opposed. Biden has said he would revive the legal battle with the Little Sisters of the Poor, the order of nuns that has fought the provision in court.

Against this backdrop, a new survey on religion and its role in American life offers a lesson for political candidates looking to improve their standing among voters who care about religious liberty. In turns out, a political candidate’s support for this freedom, a bedrock American ideal embedded in the First Amendment, is far more important to voters than their own faith when backing a candidate.

The Becket Fund, a Washington, D.C., nonprofit public interest law firm that defends this right for people of all faiths, surveyed 1,000 Americans across the country over the last year. The organization provided an early review of its Religious Freedom Index findings to RealClearPolitics and will release them publicly Tuesday afternoon.

One of the poll’s most surprising findings is just how important religious freedom is to American voters and how it factors into their choice of candidates. Respondents who were registered to vote were consistently more supportive of religious freedom than those not registered. And when it comes to a candidate’s stance on the issue, 78% of those polled said it was an important factor in their voting decisions. In comparison, only 45% said their own faith influenced their vote to a moderate degree or more.

“The message for all elected officials is there’s a clear desire there for more attention to defending religious freedom,” Caleb Lyman, the Becket Fund’s director of research, told RCP. “It’s important to a big voting bloc.”

And the country’s lawmakers have far more work to do in convincing voters they are dedicated to protecting this constitutional right. When asked which branch of government does the best job of safeguarding religious freedom, respondents were more likely to choose the courts than elected officials, including the president, Congress and state governments — with Congress given the least credit.

Becket created the Religious Freedom Index, now in its second year, as an in-depth survey of Americans’ opinions and perspectives on religion so it could detect subtle shifts over time. The data files for the survey are hosted online by the Association for Religion Data Archives, which is commonly cited in media reports for offering free public access to statistics including church membership numbers from around the world.

The core of the findings are tracked by asking the same 21 questions in the same order each year — though the group added new ones in 2020 to evaluate how the year’s turbulent events are impacting views on religion and the ability to practice it.

Some 62% of respondents said faith or religion was helping them navigate the challenges posed by the coronavirus pandemic while more than three-quarters — 78% — said religion is important to providing stability during times of social unrest. One of the poll’s most surprising findings is that Gen Z respondents, who were born in the late 1990s to the early 2010s, were much more likely to say faith had been important to their handling of COVID uncertainty and restrictions. This and other surveys have found the young adult age group to be less religious, and they are some of the least at risk during the pandemic. But these young adults are joining their grandparents — those in the over-65 group — in being more likely than the overall sampling of respondents to say faith and religion are important to dealing with the pandemic.

It generally comes as little surprise that Americans turn to religion in times of uncertainty, considering another more basic finding: Some 60% of those surveyed agreed with the statement that religion is a fundamental part of “who I am” and should be protected accordingly.

Those findings factor into the controversy, which has played out in the courts, over whether state and local governments are treating houses of worship fairly during the COVID lockdowns and restrictions. The survey found that a majority of respondents said that houses of worship should be treated with at least the same priority as reopening businesses.

When comparing state and local rules governing outdoor religious services and outdoor protests, respondents were twice as supportive of giving priority to the religious services, according to the index. That’s not a sign, however, that Americans value their personal religious pursuits more than efforts to improve racial equality. The index also found a leadership gap when it comes to the racial unrest that has swept the country this year as communities reacted to the killing of several black men and women by police. More than four out of five respondents who said faith was important also believe religious organizations and their leaders should play a role in advocating for greater racial equality, but less than half think their faith community is doing a good job of responding to the issue.

‘What He Said Was Triggering’: Dave Chappelle Attacker Explains His Motivations...