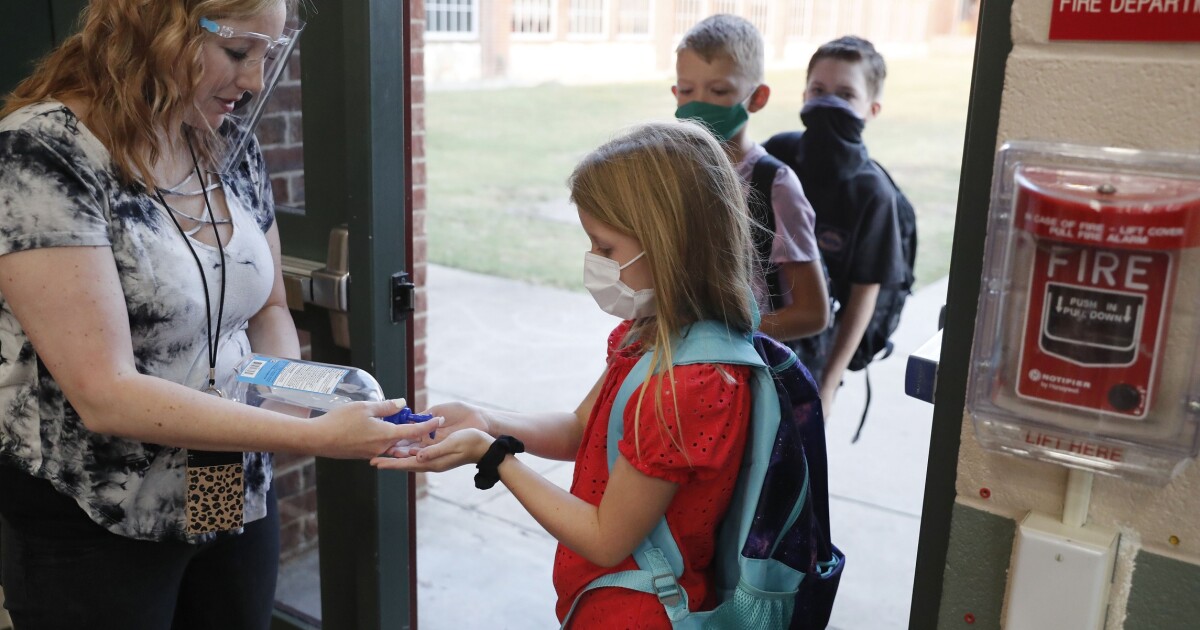 With children returning to school after the winter break, a group of Texas parents is ramping up efforts to end mask mandates in schools.

Unmask Texas, a nonprofit organization, is working to “fight back against the illegal school mandates statewide, which are requiring our children to be muzzled all day while in school or while participating in other school activities including, sports, singing, and dance.”

The group argues that the mask mandate on children is illegal, harmful and abusive.

The statewide mask mandate has been in effect since July 2. Republican Gov. Greg Abbott has said he will not lift the mandate until “a better alternative becomes available.” Lawsuits have been filed against the governor, and censure resolutions against him have been filed, but no hearings have been scheduled.

Executive Order GA-29 mandates: “every person in Texas shall wear a face covering over the nose and mouth when inside a commercial entity or other building or space open to the public, or when in an outdoor space, wherever it is not feasible to maintain six feet of social distancing from another person who is not in the same household.”

Plaintiffs argue the order is unconstitutional because “Only the Legislature can exercise law-making power, subject to restrictions imposed by the constitution.”

The order violates the due process rights of all Texans, and “has deprived Texans of the right to be free of confinement without providing Plaintiffs a meaningful opportunity to be heard,” the complaint states.

Unmask Texas argues that children’s “mental and physical health are being adversely impacted. The education and well-being of our children is being jeopardized for political gain by both parties. Our state and local elected leaders have neglected to stand up for our children, now it's time to fight back.”

Serena Ashcroft, a McKinney mother who has helped organize the movement, says the group has compiled “over 150 cases of physical and emotional harm so far” and that parents throughout the state are angry.

The mask mandate exempts children younger than 10, but school districts statewide are mandating that all children regardless of their age must wear masks or face coverings.

“Compelling students to wear a mask as a requirement to attend school is not only unconstitutional, but is a far overreach of the district's power,” Unmask Texas parents argue. “No district can engage in aversive techniques that cause harm or discomfort including covering the mouth or nose by wearing a mask,” citing Texas Education Code Section 37.0023 (7)(B).

“The school district does not have authorization, parental consent, medical staff or legal grounds to make a determination on the developmental appropriateness of mask wearing in young children,” they argue, citing Occupations Code Title 3. Subtitle B. Chapter 155, License to Practice Medicine.

The group has a growing Facebook page and has filed complaints with local and state education officials and has spoken at school board meetings.

The Texas Education Agency maintains that schools are “required to comply with the governor’s executive order regarding the wearing of masks” but add that “school systems may require the use of masks or face shields for adults or students for whom it is developmentally appropriate.”