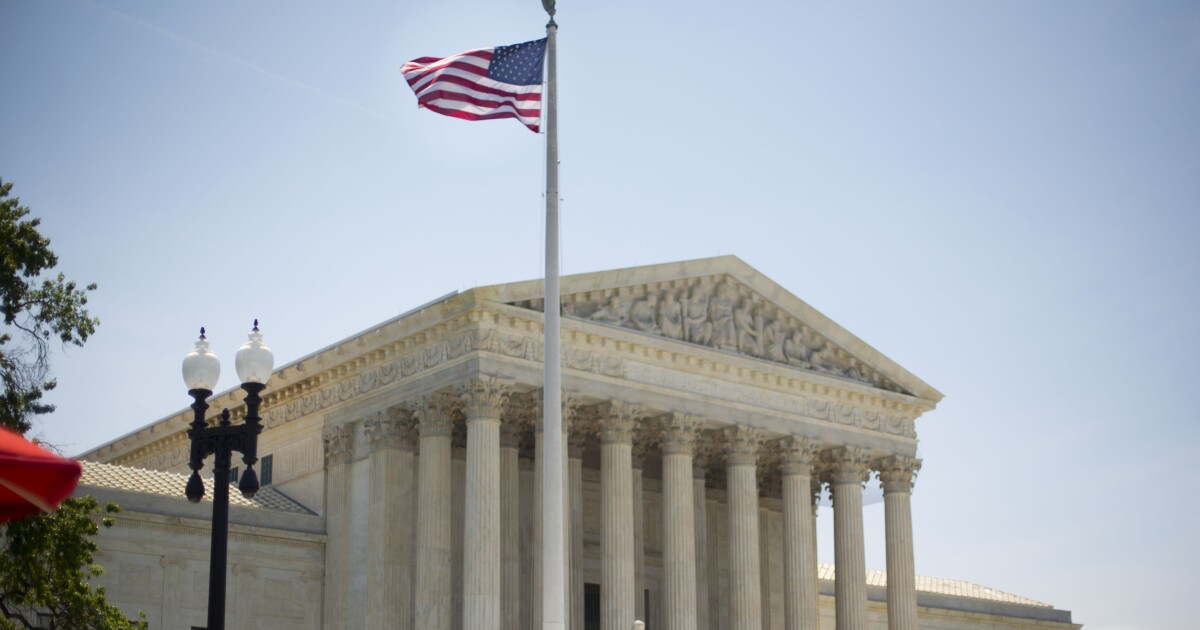 Associate Supreme Court Justice Samuel Alito ordered all of the county election boards in Pennsylvania to segregate all late-arrival ballots from the rest of the mail-in ballots and to keep them separated when the voting is conducted in a Friday night ruling.

Earlier Friday, the Pennsylvania Republican Party had called upon the U.S. Supreme Court to take up a case related to Pennsylvania's own Supreme Court, allowing the extension of the counting of mail-in ballots to three days after Election Day.

The ballots had to be postmarked by the time polls closed on Tuesday, and the party asked the highest court in the land to order that those ballots be “segregated” and not counted at this time.

“All county boards of election are hereby ordered, pending further order of the Court, to comply with the following guidance provided by the Secretary of the Commonwealth on October 28 and November 1, namely, (1) that all ballots received by mail after 8:00 p.m. on November 3 be segregated and kept ‘in a secure, safe, and sealed container separate from other voted ballots,’ and (2) that all such ballots, if counted, shall be counted separately,” Alito said.

He added: “Until today, this Court was not informed that the guidance issued on October 28, which had an important beating on the question where to order special treatment of the ballots in question, had been modified. The application received today also informs the Court that neither the applicant not the Secretary has been able to verify that all bards are complying with the Secretary’s guidance, which, it is alleged, is not legally binding on them.”

The move came as President Trump launched a number of lawsuits in battleground states nationwide and as apparent election winner Joe Biden has slowly expanded his narrow lead in a case that remains too close to call officially. Trump campaign lawyers have repeatedly urged the Supreme Court to take up the Pennsylvania case this week.

“Republican Party of Pennsylvania has filed a petition for a writ of certiorari asking this Court to resolve the important questions of federal law implicated by the Pennsylvania Supreme Court’s 4–3 decision extending the General Assembly’s Election Day received-by deadline and mandating a presumption of timeliness for non-postmarked ballots,” the GOP told the Supreme Court on Friday.

“In particular, RPP asks the Court to order Respondents Secretary of State Boockvar and the county boards of elections to log, to segregate, and otherwise not to take any action related to any ballots that arrive after the General Assembly’s Election Day received-by deadline but before the Pennsylvania Supreme Court’s judicially extended deadline,” it continued. “Given the results of the November 3, 2020 general election, the vote in Pennsylvania may well determine the next President of the United States — and it is currently unclear whether all 67 county boards of elections are segregating late-arriving ballots.”

Pennsylvania Attorney General Josh Shapiro, a Democrat, had filed a response on behalf of Kathy Boockvar, the secretary of the Commonwealth of Pennsylvania, on Thursday related to Trump campaign efforts.

“Because the Trump Campaign cannot satisfy the standard for intervention as of right or by permission, the motion should be denied. This matter has been pending before this Court for nearly six weeks. One day after Election Day, and for the second time in this case, the Trump Campaign has filed a motion for leave to intervene,” Shapiro said. “The Trump Campaign’s first motion was properly denied by the Pennsylvania Supreme Court because its generalized grievance in maintaining the electoral status quo was insufficient to justify standing or intervention. That defect has not been cured by the passage of time.”

The Pennsylvania GOP said that “in an effort to obviate the need for further proceedings before this Court, counsel for RPP contacted counsel for county boards of elections to request confirmation that the boards would segregate any late-arriving ballots” and that 42 counties “affirmatively responded that they would do so, and no county indicated that it would not” while the Pennsylvania Secretary of State “requested such confirmation and received it from 33 of those counties.”

But, it noted, “To date, a total of 25 Pennsylvania county boards of elections have not indicated whether they are segregating the late-arriving ballots.”

In late October, Pennsylvania’s secretary of state issued an order to county election boards saying that “all mail-in and civilian absentee ballots delivered by the USPS and received between 8:00 p.m. on Tuesday, November 3, 2020 and 5:00 p.m. on Friday, November 6, 2020 shall be kept separate and segregated from all other voted ballots” and that “the county boards of elections shall not pre-canvass or canvass” any of those ballots “until further direction is received.”

But the GOP said the Supreme Court should issue an order to make sure of that.

“In short, an order from the Court is badly needed. But given some county boards’ refusal to confirm that they are segregating ballots and the Secretary’s changing guidance, an order requiring segregation of ballots may not suffice to preserve RPP’s appellate rights,” the Pennsylvania Republicans said, adding, “an order at this juncture is necessary to preserve this Court’s jurisdiction to resolve this matter on the merits, as well as its ability to enter an appropriate remedy for this general election.”

The Trump campaign argued this week that the Supreme Court should be the final arbiter after the high court decided late in October that it would not expedite its review of the matter before Election Day.

Pennsylvania’s Act 77 allowed its voters to cast their ballots by mail but required that all mailed ballots be received by 8 p.m. on Election Day to be counted. It had not changed that deadline during the coronavirus pandemic. But Pennsylvania’s Supreme Court said in a 4-3 ruling that mail-in ballots would not need to be received by Election Day, instead deciding that ballots could be counted so long as they were postmarked on or before Tuesday and were received within three days.

“There is no reason for the Court to reverse course now, mere days after Election Day. If anything, the need for immediate review has diminished, because any interest in providing clear pre-election guidance has evaporated,” the Pennsylvania Democratic Party told the high court on Thursday.

Before the Supreme Court passed on taking up the case in October, Shapiro told counties to segregate any ballots that arrived after 8 p.m. on Tuesday from those arriving before then. Under those rules, ballots in Pennsylvania could still be received through 5 p.m. on Friday.

The Pennsylvania Supreme Court has likened the coronavirus pandemic to a “natural disaster” that would justify the deadline extensions.

Following a 4-4 decision on whether to grant a stay on the issue earlier in the month, the U.S. Supreme Court blocked an attempt by Pennsylvania’s Republican Party to stop that counting in October with a 5-3 decision.

Alito wrote in late October that he would have granted the GOP's request to limit ballot counting after Tuesday. Alito, whose dissent was joined by Justices Clarence Thomas and Neil Gorsuch, made clear that the Supreme Court could still rule on the Pennsylvania court's decision after Election Day.

“The Court’s handling of the important constitutional issue raised by this matter has needlessly created conditions that could lead to serious post-election problems. The Supreme Court of Pennsylvania has issued a decree that squarely alters an important statutory provision enacted by the Pennsylvania Legislature pursuant to its authority under the Constitution of the United States to make rules governing the conduct of elections for federal office,” Alito wrote.

He continued: “This is not a denial of a request for this Court to order that ballots received after election day be segregated so that if the State Supreme Court’s decision is ultimately overturned, a targeted remedy will be available.”

The Trump campaign has filed numerous other lawsuits across Pennsylvania, including in the Democratic stronghold of Philadelphia, where Republicans have alleged that their poll watchers are being blocked from observing the ongoing vote count in spite of a court order, though Trump team lawyers said some GOP poll workers were indeed in the counting room during a court hearing Thursday evening.