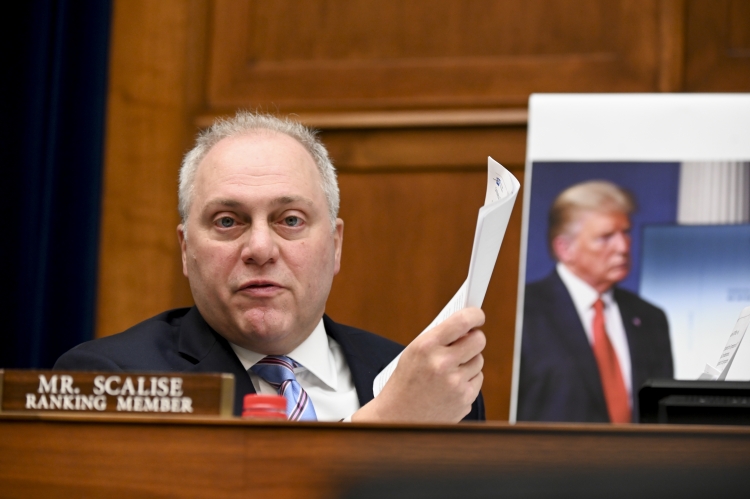 Just six weeks after a deadly insurrection against the U.S. government, incited by a president who sent a mob after his own vice president, Republicans are past their horror and hopping eagerly back on the Trump Train. The new 2021 ticket price? They must buy into his Big Lie.

The 2020 presidential contest — let’s say it again — saw Joe Biden defeat Donald Trump in a free and fair election verified not only by his own government officials at the Department of Homeland Security and the FBI but by election officials in swing states where audits and recounts bore out what 60 court cases had decided. The consensus was that no fraud or irregularities could have amounted to numbers large enough to yield a different outcome and keep Trump in office. Yet his lie, that he won in a “massive landslide” and the election was “stolen,” is now accepted by tens of millions of Americans who support him. The danger in this mass delusion is clear to Republican leaders and officeholders who know this will taint every election going further and do immeasurable damage to our fragile democracy. But, with few exceptions, they would rather lean on “my constituents believe it,” and Trump’s perpetuation of it, in order to keep their jobs.

Senate Minority Leader Mitch McConnell, House GOP conference chair Liz Cheney, Rep. Adam Kinzinger, Sen. Mitt Romney and a few others in the House and Senate have told the truth about this lie and the pernicious consequences it will have. There are fewer than 20 of these voices in the entire GOP ranks of the Congress, however. Earlier this month, a Quinnipiac poll showed 76% of self-identified Republicans said they believe there was widespread fraud in the 2020 election and that Trump won. Telling the truth — telling the voters they have been lied to — is simply out of the question for most elected Republicans.

House GOP Whip Steve Scalise made that clear on ABC News Sunday. Not only did he explain why he thought Trump was not in fact responsible for inciting the insurrection, he squirmed around the question of the election outcome by saying that “there were a few states that did not follow their states laws.” When pressed to admit the election was not stolen, Scalise then said Biden was the legitimate president “because once the electors are counted, yes, he’s the legitimate president. But if you’re going to ignore the fact that there were states that did not follow their own legislatively set laws, that’s the issue at heart that millions of people are not happy with and don’t want to see happen again.”

While Scalise does not spread The Big Lie, he won’t disavow it. He must raise doubt and contribute to a permanent cloud over President Biden in order to stay in Trump’s favor. Scalise knows this, having just visited with him at Mar-a-Lago, to — ya know — talk about each other’s families. As some Republicans declare it’s time to move on from Trump, as Arkansas Gov. Asa Hutchinson and former Rep. Will Hurd did this weekend, Scalise is well aware the 45th president is keeping a list and will be checking it twice a day, at least. Axios reported Monday that Trump is using the midterm elections of 2022 to tighten his grip over the party and launch a years-long punishment campaign. With Senate Republicans just one seat away from the majority and House Republicans needing to win back just five, he knows how to use his threats for maximum advantage. And he doesn’t need to run again in 2024 to hold all the cards, he just needs to act like it. “Trump confidants think he’ll pretend to run but ultimately pass. He knows the possibility — or threat — gives him leverage and attention,” Mike Allen wrote.

The lie is laughable — that a deep state of all Democrats, every member of the media, every judge that weighed against his election challenges in court (including the ones he appointed), former AG Bill Barr, makers of voting machines and Republicans throughout the country who certified the results in their states for Biden collaborated on the biggest conspiracy ever. Romney described The Big Lie as “a massive conspiracy, more secret and widespread than any in human history, so brilliant in execution that no evidence can be found of it and no observer among the tens of thousands in our intelligence agencies will speak of it.” And Fox News host Tucker Carlson asked, in November, why Trump team lawyer Sidney Powell had not presented any evidence of machines switching votes with helpful planning from dead Venezuelans for a plot that — if proven — “would amount to the single greatest crime in American history.” (Powell never presented the evidence, by the way.)

Trump couldn't get his lawyers to touch The Big Lie in the impeachment trial; there were limits to how much they wanted to soil their reputations. The final team representing him at the trial, indeed, took the case after several other lawyers told Trump they refused to claim widespread voter fraud that stole an election

One of Trump’s top Big Lie proliferators, the CEO of the MyPillow company, is now the target of a $1.3 billion defamation suit from Dominion Voting Systems for lying about their voting machines. The complaint against Mike Lindell states: “He is well aware of the independent audits and paper ballot recounts conclusively disproving the Big Lie. But Lindell … sells the lie to this day because the lie sells pillows.”

In addition to pillow sales, The Big Lie soothes Trump’s ego, and has helped him raise hundreds of millions of dollars. Trump even used the occasion of Rush Limbaugh’s death last week to sell the lie once again. “The election was stolen,” he said on OANN. “We were robbed. It was a rigged election.” On Newsmax he said: “We did win the election, as far as I’m concerned. It was disgraceful what happened.” And on Fox News Channel he said, “You would have had riots going all over the place if that happened to a Democrat.” The Trump-friendly anchors at all three networks refused to push back; they just let him lie.

This will be a central theme later this week when Trump takes center stage at the Conservative Political Action Committee (CPAC) where 2020 election truthers will be peddling doubt at no fewer than seven panel discussions.

So what will become painfully clear by week’s end is that Trump plans to control the GOP, dominate the 2022 midterm campaign, and keep telling millions of Americans he won reelection in 2020. He will work hard to defeat anyone who defies him and counters his claims.

Romney said the Big Lie took the country to a “dark and dangerous place. Invented and disseminated by the President, it poisoned our politics and our public discourse.” In his statement submitted to the Senate record after the impeachment trial, he said, “It is apparent that calling for unity while appeasing the big lie of a stolen election is a fraud,” and that it “falls to each of us to affirm what we all know: President Biden won the election through the legitimate vote of the American people. The division in America will only begin to heal in the light of this truth.”

Republicans appeasing The Big Lie are perpetrating a fraud that will accelerate our newer, deeper divide. Romney, Cheney and their few allies for truth won’t find new converts. They will instead be drowned out by their complicit colleagues who have started their campaign to win next year with the help of President Trump and his lies.