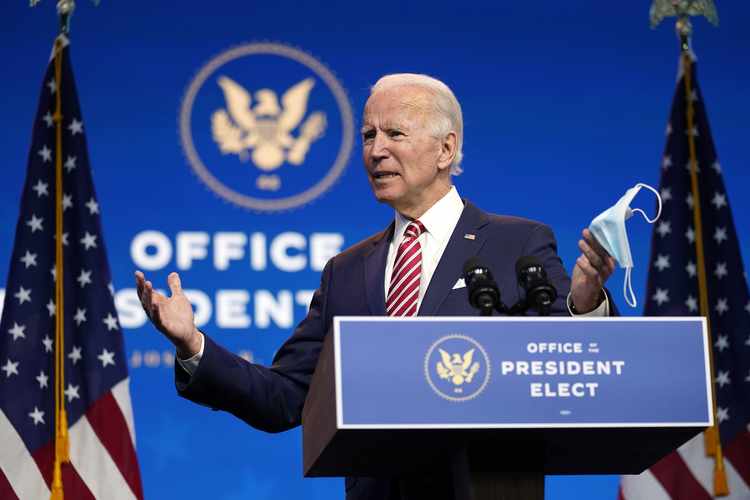 The coronavirus burns across the country, after infecting more than 11 million Americans and killing another 246,000, as two separate vaccines promise the beginning of the end of the pandemic. Joe Biden presses Donald Trump — if he won’t concede the presidential election yet — to at least share the White House immunization plan with the incoming administration. Call it the “C’mon, Man” Appeal.

The president-elect made the pitch to the current president during remarks Monday in Wilmington, Del. Trump has kept the Coronavirus Task Force from cooperating with the transition. In Biden's words, “More people may die if we don't coordinate.”

And while the regularly exasperated politicians and cable news regulars remain exasperated, Biden appealed to Trump’s ego without going apoplectic. The sooner there is cooperation, he said, the sooner the virus can be whipped and the better it will be for the outgoing president’s legacy. Take the stimulus package that has been languishing in Congress, for instance; Biden said Trump should make the most of a lame-duck session and pass it immediately.

“The idea the president is still playing golf and not doing anything about it is beyond my comprehension,” the president-elect said. “You’d at least think he’d want to go out on a positive note, but what is he doing?”

It was a taunt without overt contempt, an on-brand attempt to cajole Trump to better behavior, and Biden told reporters he was holding out hope that “the president will be mildly more enlightened before we get to January 20th.”

The Biden campaign allowed just a handful of questions after the president-elect ran more than an hour late from a meeting between corporate heads and labor leaders. (He told assembled reporters he “wished” they could have heard that conversation, though the press wasn’t allowed to attend).

What was the biggest threat to his transition right now, given Trump’s unprecedented attempt to obstruct and delay a smooth transfer of power?

He said that the delay made it more difficult to vaccinate the nation. “It’s a huge, huge, huge undertaking to get it done, prioritize those with greatest need and working our way through it,” Biden explained. Show his team the Warp Speed game plan; otherwise, if the incoming administration has to wait, “It puts us behind over a month, month and a half.”

It doesn’t appear that the president is going to come around anytime soon and admit defeat . . . What options do you have to try and ensure that you are ready to go on day one?

He said his team was building a sort of COVID coalition by meeting with Republicans and Democrats, as well as business and labor leaders, “to try to pull together a serious and consistent plan so we’re ready on day one.”

What about Trump saying Biden won, then retracting that statement, and refusing to concede . . . How did you interpret that? And at the end of the day, do you want him to concede?

He said that it was more “Trumpianism,” and that there had been “no change in his modus operandi.” But Biden added, “I think the pressure will continue to build.” Eventually the president will have to yield to the president-elect, he explained, before adding, “As I said earlier, and I probably shouldn’t repeat it, but I find this more embarrassing for the country than debilitating for my ability to get started.”

Biden clearly relaxed as the press honeymoon continued. He doesn’t need to attack Trump other than the occasional glancing blow. Congressional surrogates haven’t let up, and the most prominent and beloved expert on the president’s own Coronavirus Task Force has already been admonishing Trump publicly. Dr. Anthony Fauci said Monday that delaying the transition process could slow the rollout of the coronavirus vaccine. “We want a smooth process for that,” he said. “And the way you do that is by essentially having the two groups speak to each other and exchange information.”

The president-elect then asserted that “the only reason people question the vaccine now is because of Donald Trump.” He said he would take the vaccine himself and that the immunizations “appear to be ready for prime time, ready to be used.” This, however, was not how Biden talked about the vaccine on the campaign trail when he wondered aloud whether politics would get in the way of epidemiology.

“How are you going to distribute the vaccine when it arrives . . . ? You’ve got to make all of it available to other experts across the nation, so they can look and see. So, there’s consensus, this is a safe vaccine.”

The president has since said that Cuomo “will have to let us know when he's ready for it” before sending the vaccine to the Empire State. The governor has threatened to sue to get it.

The charge that the president had politicized the vaccine was too much for the Trump campaign, which regularly hammered both Biden and Vice-President-Elect Harris for publicly doubting whether it would be safe. In September, when the vaccine was still in development, the California Democrat said, “I would not trust Donald Trump.”

Experts, including members of the Coronavirus Task Force, have said that politics did not play in a role in vaccine development. It was announced a week after Election Day, and the early days of the Biden-Harris administration will be consumed with trying to figure out how to distribute the inherited immunizations.

While Biden has needled and prodded Trump to come to the table without overtly lecturing him, he had little patience for Scott Atlas, the president’s favored COVID adviser. He noted how Atlas had urged citizens of Michigan to “rise up” in response to Gov. Gretchen Whitmer’s new restrictions on indoor dining and gatherings, criticism that was interpreted as a call to violence, an allegation the doctor denies.