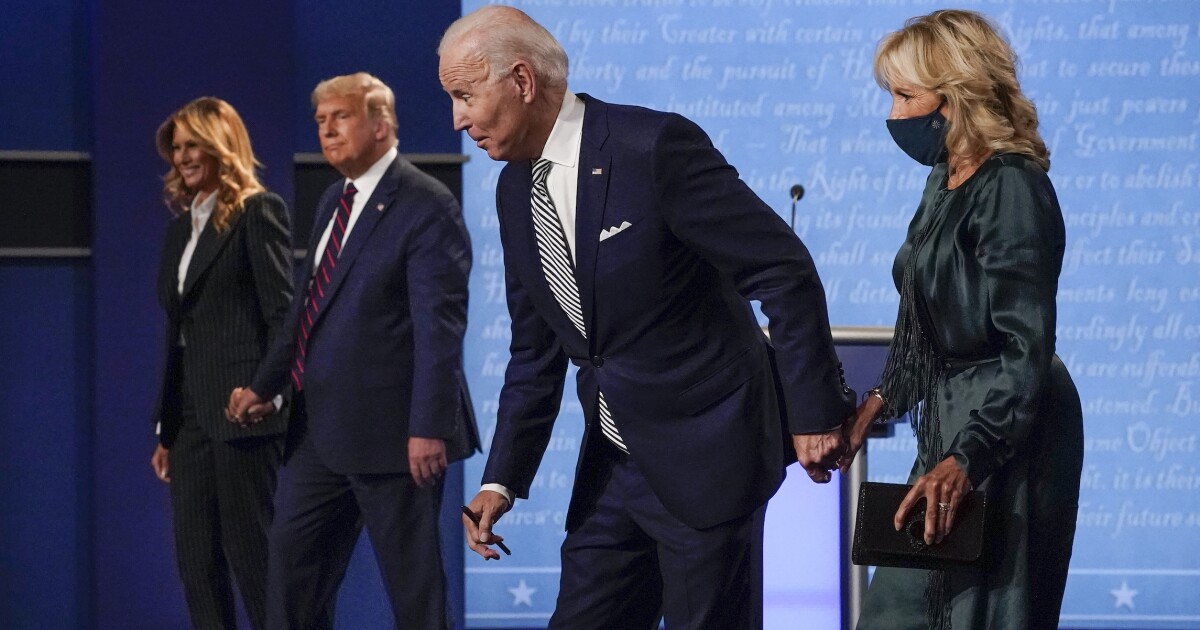 The Trump campaign filed a lawsuit in Pennsylvania on Monday asking a federal court to block the Democratic secretary of state from certifying the state’s election results amid claims of voter irregularities and wrongdoing.

Democrats in the state have vehemently denied these claims as President Trump has refused to concede the 2020 contest despite an apparent victory by former Vice President Joe Biden.

“Nothing less than the integrity of the 2020 Presidential election is at stake in this action. Defendants, the very officials charged with ensuring the integrity of the election in Pennsylvania, have so mismanaged the election process that no one — not the voters and not President Trump’s campaign — can have any faith that their most sacred and basic rights under the United States Constitution are being protected,” the Trump campaign’s lengthy lawsuit declared. “The evidence is plain that Defendants have been and are blatantly violating the protections and procedures, including those enacted by the Pennsylvania General Assembly, vitally necessary to ensure that the votes of the citizens of Pennsylvania are not illegally diluted by invalid ballots and that the election is free and fair.”

The suit was filed in the U.S. District Court for the Middle District of Pennsylvania against Pennsylvania Secretary of State Kathy Boockvar and the boards of elections in several counties. Trump’s lawyers asked the court to issue an order “that prohibits the Defendant County Boards of Elections and Defendant Secretary Boockvar from certifying the results of the 2020 General Election in Pennsylvania on a Commonwealth-wide basis.”

Trump and his allies are pinning their hopes on legal challenges and recounts in battleground states where they claim there were illegal votes and other irregularities. Many media outlets, ranging from the Associated Press to Fox News, called the race for Biden on Saturday, and he unofficially leads by more than 35,000 votes in Pennsylvania.

Democratic Pennsylvania Attorney General Josh Shapiro, who has been defending Boockvar in court against the GOP’s claims, tweeted that the Trump campaign’s claims were wrong.

“The latest meritless lawsuit to challenge PA’s election, which was overseen by bipartisan officials and was lawful, fair, and secure. For months, the majority of these lawsuits have been dismissed and found to have no merit by Courts at all levels, and this one is no different,” Shapiro said. “I am confident PA law will be upheld and the will of the people of the Commonwealth will be respected in this election.”

Trump personal attorney Rudy Giuliani hinted at the lawsuit during a surprise press conference at the Four Seasons Landscaping Company in Pennsylvania on Saturday, where he claimed that GOP observers were “deprived of the right to inspect if a single one of those ballots is legitimate” and called that “illegal” and “unconstitutional.”

“Democrat-majority counties provided political parties and candidates, including the Trump Campaign, no meaningful access or actual opportunity to review and assess mail-in ballots during the pre-canvassing meetings,” the Trump campaign told the federal court. “Allegheny and Philadelphia Counties alone received and processed 682,479 mail-in and absentee ballots without review by the political parties and candidates … Rather than engaging in an open and transparent process to give credibility to Pennsylvania’s brand-new voting system, the processes were hidden during the receipt, review, opening, and tabulation of those 682,479 votes in direct contravention of the Election Code.”

Trump campaign general counsel Matt Morgan claimed Monday that “we believe this two-tiered election system resulted in potentially fraudulent votes being counted without proper verification or oversight, as well as many voters being disenfranchised simply for casting their votes in-person.”

But a host of Pennsylvania election officials have denied such bias or impropriety.

Boockvar went on CNN on Thursday, saying, “In Pennsylvania, every candidate and every political party is allowed to have an authorized representative in the room observing the process. Some jurisdictions, including Philly, are also livestreaming, so you can literally watch their counting process from anywhere in the world. It’s very transparent.”

Republican Philadelphia City Commissioner Al Schmidt told CNN on Friday that “observers from the Democratic Party and Republican Party, from the Biden campaign and the Trump campaign, have been in our counting area observing, right up against where the process is taking place, from the very beginning on election morning when we began this.”

“The county’s Elections process has been even-handed and open. This includes all of our processes from pre-canvassing, to canvassing to the operations of the Return Board. Beginning on Tuesday morning at 7 a.m., any person with an authorized representative or watcher’s certificate from a candidate or party on the ballot in Allegheny County has been granted access to view the proceedings,” Downs told the Washington Examiner on Monday. “No party or candidate was treated differently and representatives from the Democratic, Libertarian, and Republican party were all part of these proceedings. All individuals were free to move back and forth between rooms and observer areas, were frequently provided status updates, and staff were available for questions from those individuals. At no time were canvassing operations conducted without observers having the opportunity to see the process and the counting.”

Shapiro told CBS News’s 60 Minutes on Sunday that “Donald Trump can say whatever he wants, but we just had an election, an election that was secure, an election where the votes were tallied, and a proper winner will be certified, based not on the words of President Trump, but the votes of the American people.”

Attorney General William Barr authorized the Justice Department on Monday to investigate only “substantial allegations of voting and vote tabulation irregularities” and said claims should only be investigated if they are credible and could potentially shift the result in a state's contest. In stressing that the DOJ should act fairly and without politicization, Barr also said the department should not investigate frivolous claims.

Associate Justice Samuel Alito ordered Pennsylvania to segregate any late-arrival ballots on Friday and said he would confer with the rest of the Supreme Court on whether to take up the case further. Democratic election officials in Pennsylvania insisted that, even if counted, the late-arrival ballots were very unlikely to change the election’s outcome. Shapiro also said Saturday that “there is no evidence that any county is disobeying that clear guidance to segregate these votes, and the Republican Party offers only speculation.”

Boockvar’s office said Sunday that all of Pennsylvania’s counties had agreed to segregate all late-arrival mail-in ballots.