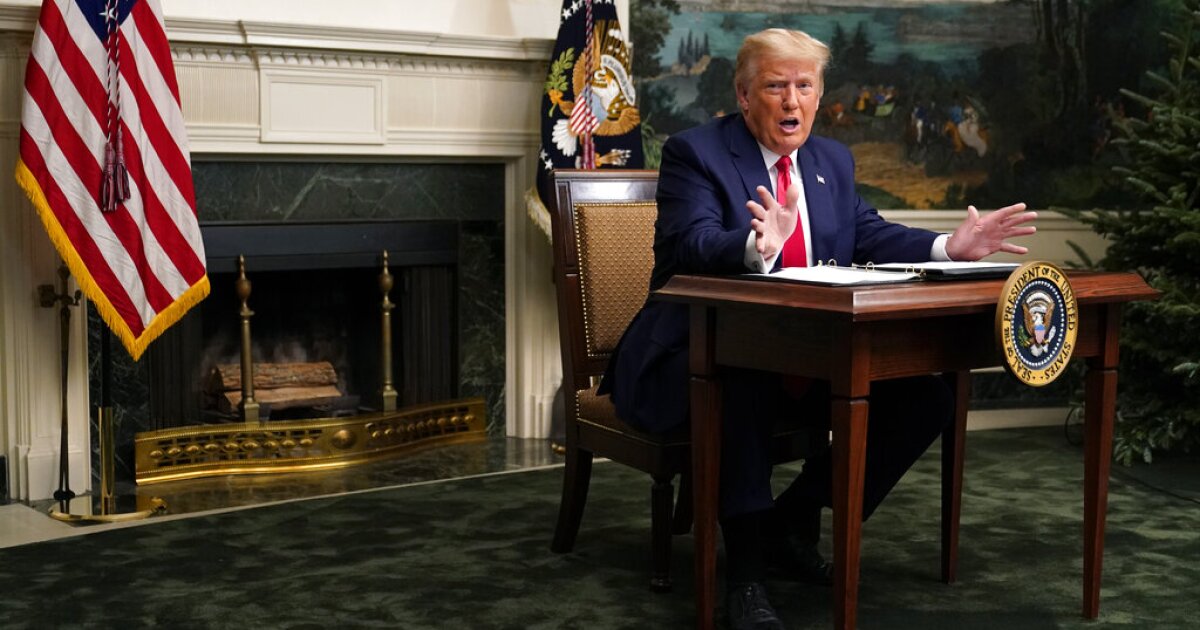 President Trump said he would “consider” appointing a “special prosecutor” to investigate the Trump-Russia investigators, expressing frustration with U.S. Attorney John Durham, who was picked by Attorney General William Barr last year to investigate the origins and conduct of the FBI’s Crossfire Hurricane investigation.

Trump made the comments during a lengthy interview with Maria Bartiromo on Sunday Morning Futures on Fox News, with the president shifting from his complaints about allegations of voter fraud — which his legal team has repeatedly lost in court — to what he saw as a lack of consequences for fired FBI Director James Comey, fired FBI Deputy Director Andrew McCabe, former CIA Director John Brennan, and others.

“Where is the DOJ and the FBI in all of this, Mr. President?” Bartiromo asked of Trump’s claims of voter fraud. “You have laid out some serious charges here. Shouldn’t this be something that the FBI is investigating? Are they? Is the DOJ investigating?”

“Missing in action. Missing in action. Can’t tell you where they are. I ask, ‘Are they looking at it?’ Everyone says, ‘Yes, they’re looking at it.’ Look, where are they with Comey, McCabe, and all these other people? You know, I said I’ll stay out of it. I wish I didn’t make that statement. There’s no reason, really, why I have to,” Trump said. “But where are they with Comey, with McCabe, with Brennan, with all these people. They lied to Congress. They lied, they leaked, they spied on our campaign. I see Carter Page is bringing a lawsuit, that’s good news. Where are they with all of this stuff? And, you know, what happened to Durham? Where’s Durham?”

Carter Page, a former Trump campaign associate, filed a lawsuit against Comey, McCabe, the FBI, the Justice Department, and others on Friday seeking $75 million in damages related to the “unjustified and illegal actions” and “unlawful spying” against him.

DOJ Inspector General Michael Horowitz’s December 2019 report on FISA abuse concluded that the FBI’s investigation was filled with serious missteps and concealed exculpatory information from the FISA court. Horowitz criticized the bureau for at least 17 “significant errors and omissions” and for its reliance upon a discredited and Democratic-funded dossier compiled by British ex-spy Christopher Steele.

Horowitz said FBI interviews with Steele's main source, U.S.-based and Russian-trained lawyer Igor Danchenko, “raised significant questions about the reliability of the Steele election reporting.” Declassified footnotes showed the FBI was aware that Steele’s dossier might have been compromised by Russian disinformation.

Durham is investigating the origins and conduct of the Trump-Russia investigation, and his inquiry has led to one guilty plea, with Kevin Clinesmith admitting he fraudulently changed the wording of a CIA email to say that Page was “not a source” for the agency. Despite rampant speculation that Durham might release a report prior to the November election, that didn’t happen.

“Before we leave the subject of Durham, I feel like something happened in September. I don’t know what happened, but we were all expecting Durham to come out and A.G. Barr to be aggressive,” Bartiromo said, adding, “Will you appoint a special counsel to investigate and to continue the investigating into what took place in the 2016 election? You mentioned Jim Comey and Andrew McCabe not facing accountability — will you appoint a special counsel?”

Trump brought up his pardon of Lt. Gen. Mike Flynn, who pleaded guilty in December 2017 to lying to investigators about his December 2016 conversations with Russian Ambassador Sergey Kislyak but told the court in January that he was “innocent of this crime” and withdrew his guilty plea. The Justice Department later moved to drop the charges in May, with the DOJ saying that “continued prosecution of this case would not serve the interests of justice.” Trump expressed his frustration with special counsel Robert Mueller’s investigation, name-dropping former Mueller “pit bull” Andrew Weissmann, whom former top Flynn investigator William Barnett recently suggested was part of an effort to “get Trump.”

“By the way, Comey, McCabe — that’s the least of it. You talk about the Logan Act, they used the Logan Act on General Flynn, who I was very proud to pardon. But they wanted to use and they did use the Logan Act on General Flynn, and you know where that started. Look, this whole thing is a terrible situation. This should’ve never been allowed to happen,” Trump claimed, adding, “And yeah, I would consider a special prosecutor. Because you know this is not a ‘counsel' — it sounds so nice. I went through three years of a special counsel prosecutor — I call it ‘prosecutor' because it’s a much more accurate term. They spent $48 million, Weissmann and all Trump haters, they spent $48 million. That was the Mueller investigation. They went through taxes, they went through everything — for $48 million you look at everything, and they found no collusion, no nothing.”

The Justice Department said Mueller’s inquiry cost roughly $32 million. Mueller released a report in 2019 concluding the Russians interfered in the 2016 election in a “sweeping and systematic fashion” but “did not establish that members of the Trump campaign conspired or coordinated with the Russian government.” While Trump associates such as Paul Manafort, Michael Cohen, and Roger Stone were convicted of crimes tied to Mueller’s inquiry, none of the crimes were specifically related to collusion with the Russians. Mueller also laid out 10 instances of possible obstruction of justice, but Barr and Deputy Attorney General Rod Rosenstein concluded Trump hadn’t obstructed.