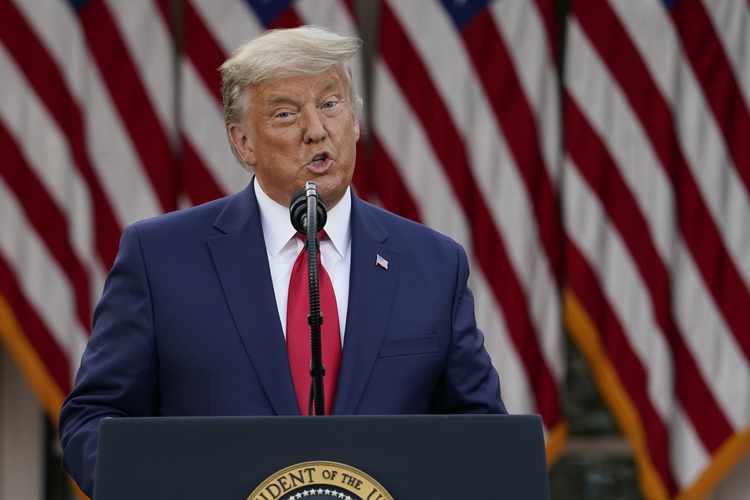 The cliches are finally true but were used up years ago.

The walls are closing in, and the shoe has dropped, and the waves have come crashing down on Donald Trump. And so, a week-and-a-half after Election Day, the president called a press conference in the Rose Garden Friday to deliver his first remarks since Joe Biden was declared the winner and to enjoy what will likely be his very last victory lap.

It was an update on the coronavirus vaccine.

“Right away, millions of doses will soon be going out the door,” Trump said of the Pfizer vaccine now awaiting final FDA approval, and when approval comes, “we will effectively end this phase of the pandemic and allow seniors to reclaim their golden years.” At that, he paused to repeat himself, “the golden years of their lives,” and to riff off script, “It’s about time they have those golden years again.”

Trump, barring a partisan miracle, will soon return to his own retirement, though he told the Washington Examiner a day earlier and as his campaign’s legal challenges were pending, “Never bet against me.” But just in case, he got his last shots in on Friday.

First there was Pfizer, the American pharmaceutical company that had developed the vaccine to defeat “the China virus.”

The White House had commissioned Operation Warp Speed, and Trump said that the end result was “five times faster than the fastest prior vaccine development in history.” The company had tried to distance itself from the president when it announced the vaccine on Monday, a move that clearly annoyed the president.

“Pfizer said it wasn't part of Warp Speed, but that turned out to be an unfortunate misrepresentation,” he said. “That's why we gave them the $1.95 billion,” he added, referring to the contract between the company and the federal government to distribute 100 million doses of the vaccine.

Then there was the governor of New York who had complained publicly that the vaccine was developed while Trump was in the White House.

“He doesn’t trust where the vaccine’s coming from,” Trump said. “These are coming from the greatest companies anywhere in the world, the greatest labs in the world, but he doesn’t trust the fact that it’s this White House, this administration.” And because of that criticism, he promised that “the governor, Gov. Cuomo, will have to let us know when he’s ready for it.”

The final criticism was an invective against expertise in general and came courtesy of Alex Azar, Trump’s Health and Human Services secretary. “Back in the spring, we were told by all the experts that the vaccine was a year or a year-and-a-half away,” he said, “and the announcements I just highlighted would have been unthinkable.”

“The president said that's not acceptable,” Azar recalled, and now “we are on track to deliver a safe and effective vaccine to our most vulnerable this year.”

From the broad proclamations to the shots fired at those he felt had wronged him, the remarks were everything Washington has come to expect from this president. He bragged and he boasted but he was not wrong when he said that the vaccine had arrived ahead of schedule. Left unsaid in the Rose Garden but rippling through the White House was frustration that it hadn’t come sooner.

Millions of doses will be made available to front-line workers and the elderly in December, Trump said on the same day that the United States reported a record high in cases for the third consecutive day. What would the president’s golden years have looked like if Pfizer had released its vaccine data in October as originally planned? A senior White House aide who monitored vaccine development daily told RealClearPolitics that Pfizer’s decision to delay the release until November was “a scandal.”

Trump accused the company earlier of not having “the courage to do it before” Election Day, while Pfizer executive told Science Magazine that “what people believe is their business.” That vaccine will soon be shipped across the country because Pfizer’s business includes a billion-dollar contract with the federal government.

While Trump only mentioned the election in passing in the Rose Garden, he held out hope of a victory once legal challenges in Arizona and Michigan and Pennsylvania were settled. When would that eventually happen? He told the Washington Examiner on Thursday, “probably two weeks, three weeks.” That same day the Department of Homeland Security announced in a statement that the election had been “the most secure in American history,” and that “there is no evidence that any voting system deleted or lost votes, changed votes, or was in any way compromised.”

Prognosticators and Democratic politicians had promised for years that scandal and then his impeachment would eventually bring Trump to an end. They were wrong. It was the electorate who decided not to give him a second term.

Hours before walking into the Rose Garden with Trump, Vice President Pence had travelled to Arlington, Va., to privately address a Young America’s Foundation retreat and to tell the collegiate vanguard of the conservative movement that the election wasn’t over. Legal challenges and recounts would proceed, Pence said in remarks obtained exclusively by RCP, because “any time a fraudulent vote enters the ballot, it literally cancels the honest vote of an American.”

“We are going to stand to preserve the integrity of the vote,” Pence said in the ballroom of the Crystal City Marriott. “We're going to fight for an outcome in this election that wins us four more years.”

The future is uncertain for Pence. His career has again become an object of Beltway speculation as political watchers wonder if the vice president harbors his own ambitions for the White House. But Pence remained faithful to the president and also to the president’s legacy. He remembered during his first campaign how he first met Ronald Reagan, the patron saint of modern American conservatism, and spoke of how Martin Luther King Jr. and John F. Kennedy influenced him while growing up.

“And I can't help but think that President Trump's had the same impact on each and every one of you,” Pence said bringing his remarks to a close. “He's just reminded you what real leadership looks like: what strong, unapologetic American leadership looks like on the world stage; about the difference that one person can make if they hew to the ideals and principles that have always made this country great.”