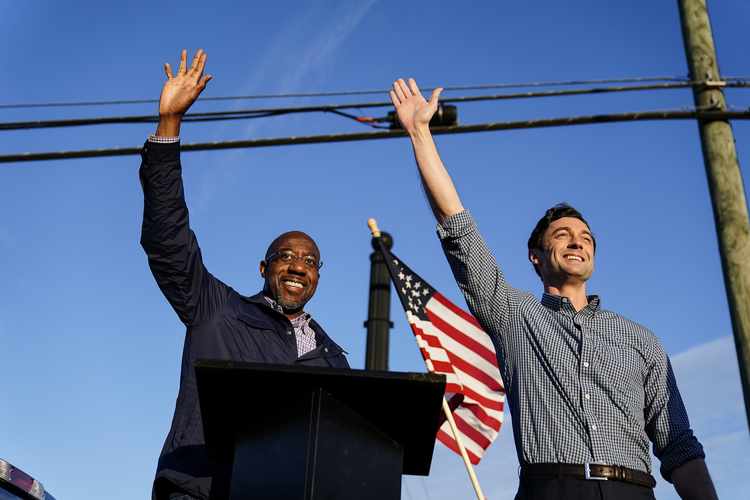 As the dust and dismay have settled in on Democrats assessing the 2020 election and planning for a Joe Biden administration, it’s perfectly clear the president-elect is boxed in by Republicans and even two more Senate seats aren’t going to change that. Progressives, who took a pounding in the election, will soon have to wake from their fever dreams. They can posture and push for Sen. Bernie Sanders to get a Cabinet post, they can keep locating polling data to show their ideas are popular, but Democrats will be passing no sweeping reforms in a Biden presidency.

Even if they prevail on Jan. 5 in the twin Georgia runoff elections, picking up two seats to gain a 50-50 split in the U.S. Senate, Democrats will have to rely on Vice President-elect Kamala Harris to break tie votes and will still be blocked by the 60-vote filibuster threshold. On their best day, the largest number of moderate Republicans they could hope to woo is three.

Democrats will not be eliminating the legislative filibuster to avoid these political roadblocks, because they won’t have the votes to do so. Pack the Supreme Court, monkey with the Electoral College, create two new states? Nope. An aggressive climate action plan, free college, socialized medicine? No way.

Over in the House of Representatives, Republicans won a net of nine seats and are in the hunt for more as races are still being counted, and the Democrats majority will be a mere sliver. But Democrats don’t want to talk too much about this right now because they want to win in Georgia. While they all share that goal, progressives are still at war with the party leadership, hoping they can prove their point in the Peach State. They are going to sell their voters there a promise of big change they say a Democratic Senate majority can deliver if Jon Ossoff and Raphael Warnock beat the two GOP incumbents. But party officials, having watched Biden win a close Georgia election by only speaking of restoring the soul of America, the promise of more jobs, and better wages and health care, are asking party foot soldiers to bear that in mind. The assistant majority leader in the House, Rep. Jim Clyburn, wasn’t subtle in a warning he issued just days after the election. “If we’re going to run on ‘Medicare for All,’ defunding the police and socialized medicine, we’re not going to win,” the South Carolina Democrat said. So far Ossoff and Warnock seem to be taking their cues from the top.

No matter the outcome, progressives won’t get what they want. After estimates of a blue wave that never surfaced, the drastic action agenda isn’t dead on arrival — it will not arrive at all. The Biden administration will simply be limited to executive orders, the kinds that undo the ones Donald Trump took — to re-enter the Paris Climate Accord, to re-enter the World Health Organization, to reinstate DACA, and to end the travel ban. It’s hard to imagine any immigration legislation making its way through the House, let alone the Senate, and into law.

On climate, the new administration will certainly, almost immediately, roll back more than 100 rollbacks the Trump administration executed in environmental and energy regulation and place limits on drilling leases in federal waters and on federal land. But we won’t see a $2 trillion effort to make the electricity grid carbon free in 15 years or a carbon tax. Nor will Democrats likely be able to end tax breaks for oil companies.

The Biden administration will not be able to expand the Affordable Health Care Act as planned either. While legal experts assessed oral arguments last Tuesday in the Supreme Court and found it unlikely the law will be dismantled in the case currently before the justices, Democrats are worried the law has been severely weakened by Trump and must be strengthened to address an increased health care burden created by the pandemic. Biden can take executive action to make operational changes to the ACA, to limit or end short-term plans or perhaps offer special new enrollment periods — all reversals of steps Trump took. But he won’t get a public option, or be able to significantly expand eligibility for Medicare and Medicaid. So the only potential scenario to address the high deductibles and premiums in Obamacare with enhanced subsidies would be to use the budget reconciliation process to raise taxes on those making more than $400,000 a year. On that vote, depending on what’s in the bill, they may attract Sen. Susan Collins, or Sen. Lisa Murkowski or Sen. Mitt Romney — but not all three.

There are other areas of health care on which Biden could work with Republicans, such as surprise medical billing or reforms to lower the cost of prescription drugs, but not much has changed since Senate Majority Leader Mitch McConnell refused to give them votes on the Senate floor last year.

No matter what a Biden administration does on climate or health care, additional lawsuits are expected from Republican attorneys general around the country on both, and more than 220 new conservative federal judges confirmed by President Trump will make those cases far more challenging for Democrats to win.

Progressive candidates only won insurgent primary campaigns, not swing seats. Their preferred presidential candidates lost to Biden in the primary. They didn’t mobilize all those voters they wanted to, so they will have to listen to the establishment lament their limitations in a gridlocked government. Democrats are facing what is surely going to be a difficult midterm election in 2022, with a president-elect far more interested in calming the country down than pursuing progressive goals and positioning the party for 2024, should he step down after one term.

Ambitious plans will have to wait at least another four years.