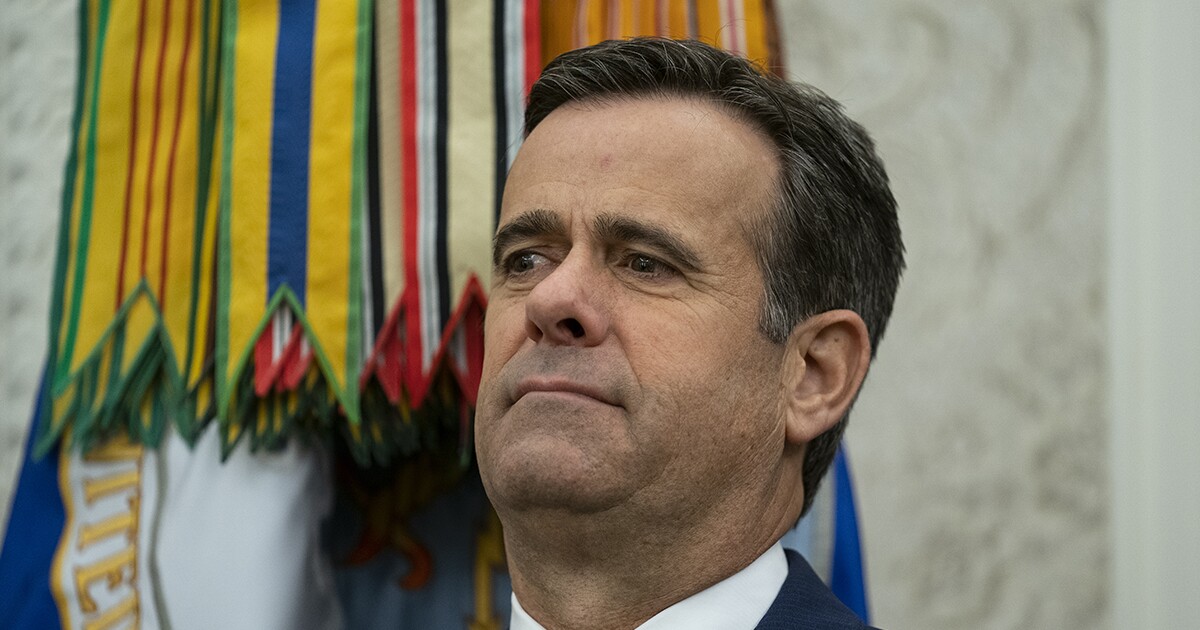 Director of National Intelligence John Ratcliffe says he shared thousands of documents with U.S. Attorney John Durham and is counting on the now-special counsel to get the truth out to the public about what he views to be massive wrongdoing by those who conducted the Trump-Russia investigation. But, the spy chief stressed, that doesn't mean all the documents given to the federal prosecutor should be declassified, as some Republicans, including President Trump, have discussed.

“Between my predecessor Richard Grenell in an acting capacity and myself, we have declassified most of the intelligence community documents that would be suitable for the public to see, that wouldn’t jeopardize sources and methods,” Ratcliffe said in a phone interview with the Washington Examiner on Thursday. “There are others, many many documents — I think it’s been out there that I’ve provided literally thousands of documents to John Durham, but many of those do contain sources and methods that we can’t make public for a number of a reasons, including to jeopardize any investigation that’s going there. So I think the level of cooperation — I’ve given them everything that they’ve asked for.”

Republican allies of Trump had high expectations for Durham leading up to the election, and some even insisted there should be full transparency with mass declassifications of secrets they expected would be damning for the Obama administration and top intelligence and law enforcement officials in what has become known as the “Russiagate” controversy. In early October, it looked as though they got their wish. Trump tweeted a call for all of the Russia investigation documents to be made public.

“I have fully authorized the total Declassification of any & all documents pertaining to the single greatest political CRIME in American History, the Russia Hoax. Likewise, the Hillary Clinton Email Scandal. No redactions!” Trump tweeted, adding that “all Russia Hoax Scandal information was Declassified by me long ago. Unfortunately for our Country, people have acted very slowly, especially since it is perhaps the biggest political crime in the history of our Country. Act!!!”

But following a federal court order, Trump’s chief of staff, Mark Meadows, told the judge later that month that the president’s tweets were not declassification orders and were not meant to reveal any further information related to special counsel Robert Mueller’s investigation.

Despite rampant speculation that Durham might release a report prior to the conclusion of the presidential race, that didn’t happen, and Trump even vented about it. But Attorney General William Barr did reveal this week that, days before the November election, he elevated Durham to special counsel status, tasked with investigating any violations of law related to the inquiries conducted by the FBI’s Crossfire Hurricane operation and, later, Mueller’s team. The order, which was revealed on Tuesday, provides the federal prosecutor from Connecticut further protection against the prospect of President-elect Joe Biden trying to shut down the criminal inquiry.

So far, Biden has not been asked about and has not said whether he would allow Durham's work to continue during his administration. Democrats such as House Intelligence Committee Chairman Adam Schiff have attacked Durham’s appointment as special counsel and suggested how Biden could undo it.

Barr said Durham should submit a final report once he has concluded his investigation so that the public can learn what he has uncovered.

“I don’t know what conclusions he is going to come to, but people deserve the truth — they deserve a full accounting of it,” Ratcliffe said.

Durham's inquiry, which began in 2019, has already led to one guilty plea, with Kevin Clinesmith admitting that he fraudulently changed the wording of a CIA email to say that former Trump campaign associate Carter Page was “not a source” for the agency despite the FBI being informed that Page had been an “operational contact” for the CIA for years. Nearly all of the signers of the Foreign Intelligence Surveillance Act warrants against Page — former Deputy Attorney General Rod Rosenstein, fired Deputy FBI Director Andrew McCabe, and fired Deputy Attorney General Sally Yates — testified earlier this year that they would not have signed off on the FISA warrants against Page if they knew then what has come out about the process. Fired FBI Director James Comey testified that he would not have signed off on the FISA applications without a “much fuller” discussion.

“There was an abuse of power and of legal authorities, and it’s not a question about whether those things took place — they did. I mean there’s an FBI lawyer who is going to jail for counterfeiting evidence before the FISA court. And that after all of the Obama-Biden senior national security officials said the idea of illegal spying and abuse at the FISA court is a bunch of nonsense, and now, they’re sprinting the opposite direction,” Ratcliffe said. “I mean, literally, every one of them — Comey, McCabe, Yates — they’ve all said, ‘Oh my gosh, we’re shocked, and had we only known.’ And so, again, the American people deserve an accounting, and I’ve certainly provided a lot of information to the now-special counsel to provide that accounting, and I’m counting, like all Americans, on him to talk about a lot of the things that I know that I can’t talk about.”

DOJ Inspector General Michael Horowitz released a report in December 2019 that concluded the FBI’s investigation was filled with serious missteps and concealed exculpatory information from the Foreign Intelligence Surveillance Court. Horowitz criticized the bureau for at least 17 “significant errors and omissions” in its surveillance of Page and for its reliance upon a discredited and Democratic-funded dossier compiled by British ex-spy Christopher Steele.

Declassified footnotes showed that the FBI was aware that Steele’s dossier might have been compromised by Russian disinformation, and Horowitz said that FBI interviews with Steele's main source, U.S.-based and Russian-trained lawyer Igor Danchenko, “raised significant questions about the reliability of the Steele election reporting.”

In October, Ratcliffe declassified handwritten notes from former CIA Director John Brennan showing he briefed then-President Barack Obama in 2016 on an unverified Russian intelligence report claiming former Secretary of State Hillary Clinton planned in July 2016 on tying then-candidate Trump to Russia’s hack of the Democratic National Committee to distract from her improper use of a private email server. He also declassified a September 2016 CIA counterintelligence referral on the allegations to Comey and fired Deputy Assistant Director for Counterintelligence Operations Peter Strzok.

Ratcliffe's move was met with a backlash from Democrats and national security veterans. Brennan responded on CNN, saying that “it is appalling, his selective declassification of information that clearly is designed to advance the political interests of Donald Trump and Republicans who are aligned with him.” At the time, Ratcliffe released a statement saying that “this is not Russian disinformation and has not been assessed as such by the intelligence community.”

The same month, the nation’s spy chief also sent the intelligence community’s watchdog an investigative referral related to a 2018 Republican-led House Intelligence Committee report that critiqued some of the tradecraft in the Obama-era Intelligence Community Assessment of 2017 on Russian interference in the 2016 election.

Mueller released a report in 2019 concluding that the Russians interfered in the 2016 election in a “sweeping and systematic fashion” but “did not establish that members of the Trump campaign conspired or coordinated with the Russian government.”