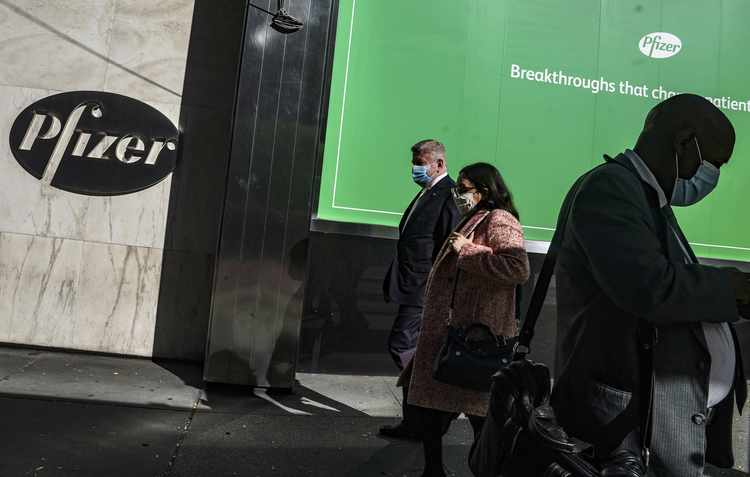 They were very happy, and they were in a hurry to get to the White House. On Saturday morning, thousands gathered just beyond the executive residence to cheer the ouster of Donald Trump as much as the apparent victory of Joe Biden. Some danced and others popped champagne and most, but not all, wore masks in a crowded celebration that continued throughout the weekend.

While the reaction was universally positive, it was still a bittersweet development for the staffers inside the White House. Of course, they cheered. How couldn’t they? Everyone wants the pandemic over. They just wished word of the vaccine had come sooner — literally any moment before Election Day. Monday night, in a tweet, the president complained that “Pfizer and the others would only announce a vaccine after the Election, because they didn’t have the courage to do it before.”

A senior White House aide told RealClearPolitics that the administration only learned of the vaccine from news reports. Biden, meanwhile, was notified the night before. He offered congratulations and heralded the breakthrough as a “cause for hope.” But he told the country to keep covering their faces.

“The head of the CDC warned this fall that for the foreseeable future, a mask remains a more potent weapon against the virus than the vaccine,” Biden wrote in a statement. “Today's news does not change this urgent reality. Americans will have to rely on masking, distancing, contact tracing, hand washing, and other measures to keep themselves safe well into next year.”

Dispensing with nuance, Trump reacted with characteristic superlatives. “STOCK MARKET UP BIG, VACCINE COMING SOON. REPORT 90% EFFECTIVE,” he tweeted. “SUCH GREAT NEWS!” The president had promised for months that the beginning of the end was around the corner. Operation Warp Speed, the effort to deliver a vaccine in record time, was on track, he liked to remind reporters, and the effort might even develop a vaccine “before a very special date.”

“President Trump is getting this vaccine in record time,” Trump said at a September news conference. “By the way, if this were the Obama administration, you wouldn't have that vaccine for three years, and you probably wouldn't have it at all.”

But Dr. Moncef Slaoui, the chief scientific adviser to Operation Warp Speed, said a vaccine by October was unlikely. So did Dr. Anthony Fauci, the most prominent and popular member of the White House coronavirus task force. Instead, the vaccine announcement came six days after the election as votes are still being counted in some parts of the country.

A spokeswoman for Pfizer said the timing of the vaccine was always apolitical. “We have always said that science is driving how we conduct ourselves — not politics,” Kathrin Jansen, a senior vice president and the head of vaccine research and development at the company, told the Times. She insisted that Pfizer was not a part of Operation Warp Speed.

But as Jansen later conceded, the company had agreed to be a supplier of the vaccine. In a July press release, the company announced that Pfizer and German partner BioNTech had reached an agreement with Health and Human Services and the Department of Defense “to meet the U.S. government’s Operation Warp Speed program goal to begin delivering 300 million doses of a vaccine for COVID-19 in 2021.”

Trump and his campaign aides could hardly be blamed for wondering what would have happened if a vaccine had been available before the election. Exit polling shows that the coronavirus was a top concern for voters, and Republicans can’t help but wonder whether this good news might have pushed Trump across the finish line first. Some were bitter at the Pfizer announcement, and one senior White House official monitoring vaccine development even told RealClearPolitics, “It is a scandal.”

The statement was in reference to the pharmaceutical company’s decision in late October to forgo an initial interim analysis. Instead, as industry journal STAT first reported, Pfizer began the analysis of the trial vaccine the Wednesday after Election Day.

“This means that the statistical strength of the result is likely far stronger than was initially expected,” Matthew Herper reported after a Monday interview with William Gruber, Pfizer’s senior vice president of vaccine clinical research and development. Herper added, “It also means that if Pfizer had held to the original plan, the data would likely have been available in October.”

Pfizer Chairman and CEO Albert Bourla asserted in an Oct. 16 open letter that “we are operating at the speed of science,” and “we may know whether or not our vaccine is effective by the end of October.”

While bickering continues in Washington over what could have been, Pfizer and government officials are now planning how to distribute the vaccine. It won’t be easy. To be effective, the injection must be administered twice. Shipping the vaccine presents another massive challenge — it must be kept at -80 Celsius during transportation.

The reward will be worth it. The pandemic that began in China, and which experts agree was made worse by Beijing's malfeasance, could soon end, thanks to the efforts of an American pharmaceutical company.

“There’s a lot at stake for humanity,” Bourla told the New York Times. “If we get it right, the world can be saved.”