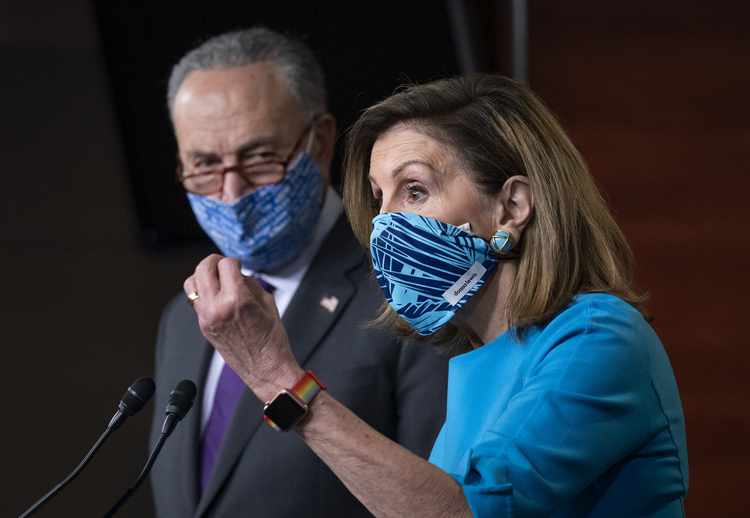 There is something unseemly about the Democrats’ insistence that the apparent defeat of President Trump in the recent election is a repudiation of Republican policies.

The two key words in that sentence are “apparent” and “repudiation.”

First of all, as everyone knows but the news media refuse to acknowledge, Joe Biden’s Electoral College victory is unofficial, and if there were a plot to steal the election in battleground states such as Pennsylvania and Michigan, then Biden’s “apparent” victory could possibly turn into jail time for some high-placed Democrats.

One of the most compelling reasons why the GOP might be able to find evidence of election fraud is that so-called “repudiation” of Trump and his policies that Democrats have been trumpeting for the last two weeks. You know, the repudiation where the alleged white supremacist increased his share of the black vote nationwide from 8% in 2016 to 12% in 2020. The repudiation where “Build That Wall” Trump went from 28% of the Latino vote to 34% in four years. The repudiation where Trump’s support among women ticked upward – and did so among male voters as well.

Either way, I suppose the current status of the presidential election justifies a celebration by Democrats for the time being. Too bad for them – it may be the last celebration they get to enjoy for quite some while.

Up next will be the Jan. 5, 2021, runoff elections for two Senate seats in Georgia. On paper, this looks like a great opportunity for the Democrats to gain a majority in the upper chamber. (If they win both seats, the resulting 50-50 tally would allow presumed Vice President Kamala Harris to break tie votes in her role as president of the Senate.) But this is also a perfect chance for voters in a swing state narrowly carried by the Biden-Harris ticket to express buyers’ remorse.

Democrats are expected to spend at least $100 million to topple incumbent Republicans David Perdue and Kelly Loeffler, but I suspect that all the money in the world could not entice Georgians to give Biden and Harris their socialist majority in the Senate. Divided government is all that stands between us and the stock market crash of 2021, and Republicans will make sure that everyone knows what’s at stake. Chuck Schumer, who would be majority leader if Democrats prevail, yelled excitedly at a rally, “Now we take Georgia, then we change the world!” This jarring overreach ought to scare the bejesus out of Americans who don’t want to see the Constitution rewritten by a power-mad clique of coastal elites.

If I am right, and Mitch McConnell remains as Senate majority leader for at least the next two years, then the Biden legacy will have to be based on executive orders and Trump policy plagiarisms because McConnell will make sure the new president gets just as much courtesy and compromise from the Senate that Nancy Pelosi showed Donald Trump in the House. Ain't payback a bitch?

As for Pelosi, does anyone think she will be a powerful speaker of the House in the next Congress? A few seats remain to be officially decided, but it looks like Democrats will have the slimmest majority imaginable with as few as 221 seats. Since 10 of those Democrats did not vote for Pelosi in the last Congress, it is entirely possible that she will be unable to get the 218 votes she needs to return as speaker. Even if she does, her majority will be so tenuous that it will be difficult if not impossible to get through the radical agenda envisioned by Reps. Alexandria Ocasio-Cortez and Ilhan Omar. This is the most important untold story of the 2020 election.

But it gets even worse for Democrats.

Republicans didn’t just gain seats in the U.S. House; they gained seats in statehouses as well. That will strengthen the Republican hand as the legislatures in many states control the redrawing of U.S. House districts, which happens every 10 years following the census. The next census itself could also benefit Republicans if enough people moved out of historically blue states to pad the congressional delegations in states like Texas and Florida.

Without getting into the minutiae, Republicans can expect to gain between a half dozen and two dozen safe House seats going into the 2022 midterm elections, depending on how ruthlessly they wield their power. If so, that would give a President Biden just two years to accomplish his liberal transformation of the nation. In addition, if the House flipped to the Republicans in 2022, it would open up the possibility of using the impeachment power of the lower chamber against Biden in retribution for Adam Schiff’s overreaching attacks on President Trump.

What about the Senate in 2022? That’s the one bright spot for Democrats. Just as they were this year, Republicans will be on the defensive. Assuming that Georgia remains Republican after the Jan. 5 runoff elections, then the GOP would start with a 52-48 majority. Republicans would be defending 21 seats in 2022 while only 13 Democratic seats would be up for grabs. Democrats would only need a net gain of two seats to regain control of the chamber with a Democrat as vice president. It’s too early to game out all the possible scenarios, but it does provide a glimmer of hope for Democrats at the very least.

Nonetheless, when you consider all the components of political control for the next four years, if you are a Republican you have reason to be optimistic. And if you are a Democrat, you have good reason to start making excuses.

Oh, did I mention 2024? The worst nightmare for Democrats is that Donald Trump loses reelection this year but remains engaged with the electorate. With Richard Nixon, it was a joke, but with Trump, it sounds like a convincing campaign slogan: “He’s tan, he’s rested and he’s ready” — and he has unfinished business.