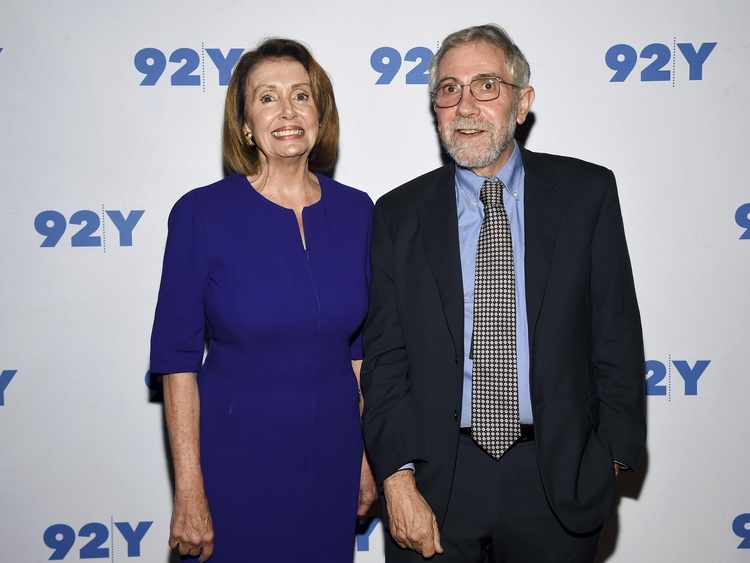 When Joe Biden is inaugurated, he will immediately be confronted with an unprecedented challenge — and I don’t mean the pandemic.… I mean, instead, that he’ll be the first modern U.S. president trying to govern in the face of an opposition that refuses to accept his legitimacy. And no, Democrats never said Donald Trump was illegitimate, just that he was incompetent and dangerous. – Paul Krugman, New York Times, Dec. 1, 2020.

In 1987, at a time when Paul Krugman was raising questions about global trade that would eventually win him a Nobel Prize in economics, the Partnership for a Drug-Free America launched an evocative ad campaign titled “This is your brain on drugs.”

Much-ridiculed today, the 30-second spot – retro even at the time – showed a man holding up an egg (your brain) over a hot skillet (drugs). The man cracks the egg in the pan, where it is, well, fried. Apparently, excess partisanship has a similar effect on the human mind. Although the Royal Swedish Academy of Sciences hasn’t asked for its award back, a cynic might wonder if Krugman’s economics writing had the same level of intellectual rigor as his political commentary.

But this is not an opinion column: I’ll stick to the facts. What you’re reading now is what, in my newspapering days at the San Jose Mercury News, we called a “set-rec.” (It sets the record straight.) In truth, during the past four years millions of Democrats — from the rank-and-file marchers and organizers to the party’s most prominent elected officials in country —  questioned Trump’s legitimacy, as did numerous anti-Trump pundits and Obama-era U.S. intelligence community officials. Let’s go to the tape:

Jan. 13, 2017.  “I don't see this president-elect as a legitimate president,” Rep. John Lewis said on “Meet the Press” while explaining why he would not attend Trump’s inauguration. “I think the Russians participated in helping this man get elected. And they helped destroy the candidacy of Hillary Clinton.”

Jan. 16, 2017. “Yes, I will respect the constitutional prerogatives of the presidency,” added Rep. Don Beyer, a Virginia Democrat. “But I will not be part of normalizing or legitimizing a man whose election may well have depended on the malicious foreign interference of Russia’s leaders.”

Jan. 18, 2017. Two days later, as the number of House Democrats boycotting the inauguration ballooned,  Illinois Rep. Jan Schakowsky added her name to the list “in protest of a president who used bigotry, fear, and lies to win an election that was tainted by foreign interference and voter suppression and who intends to betray the interests of the ordinary working people who put him in office.”

Jan. 20, 2017. A headline in the Washington Post informed readers that “the campaign to impeach President Trump has begun.” Actually, Trump wasn’t yet president when Ron Fein, an activist lawyer heading the effort, told the newspaper, “If we were to wait for all the ill effects that could come from this, too much damage to our democracy would occur.”

Feb. 19, 2017. The first Presidents Day weekend of Trump’s White House tenure was celebrated by tens of thousands of progressives in cities across the country who marched in “Not My President Day” rallies. In Georgia, Trump’s impeachment was one of the demands of the organizers. In New York, those attending the protests included Chelsea Clinton and Mayor Bill de Blasio. In San Francisco, the event was organized by the Young Democrats club. Although most of the organizers took pains to point out that they weren’t questioning the legitimacy of the Electoral College or the results of the 2016 election, thousands of marchers carried signs and gave interviews doing exactly that.

April 17, 2018. Marquette University professor Julia Azari, writing in Vox, explained to her readers that “the challenge of Trump’s presidency is legitimacy, not power.”

July 17, 2018. Writing for The Atlantic, David Frum wrote about Trump’s “crisis of legitimacy.”

July 28, 2018. “We need to talk about a forbidden subject: the legitimacy of the current president.” So began cultural critic Virginia Heffernan’s Los Angeles Times column. “There’s been a code of silence around President Donald Trump’s shady victory in 2016,” she continued.

Feb. 19, 2019. Fired FBI official Andrew McCabe told CNN’s Anderson Cooper that he thought it “possible” that Trump is a “Russian asset.” “I completely agree with the way Andy characterized it, you know, that it is a possibility,” former Director of National Intelligence James Clapper said on CNN the following night. Former CIA director John Brennan, among the most personally vitriolic Trump critics, said seven months earlier that Trump’s words at a joint press conference with Russian President Vladimir Putin were “nothing short of treasonous.”

May 14, 2019. At a Biden campaign event in Nashua, N.H., a long-winded woman who described herself as having “Trump derangement syndrome” called Trump an “illegitimate president” because he won the 2016 election by nearly 80,000 votes in Pennsylvania, Wisconsin, and Michigan — aided, she said, by the Kremlin.

“I think all the talk about impeachment and what the Democrats should do, that’s fine, it’s theoretical at this point,” the woman told the former vice president. “Let them investigate, let them subpoena, let them go to the Supreme Court, he’s illegitimate.” In response, Biden quipped, “Would you be my vice presidential candidate?” Turning to the rest of the crowd, Biden added, “Folks, look, I absolutely agree.”

June 28, 2019. Six weeks later, it was Jimmy Carter’s turn. “There’s no doubt that the Russians did interfere in the election, and I think the interference, although not yet quantified, if fully investigated would show that Trump didn’t actually win the election in 2016,” Carter said during a panel discussion at a conference in Leesburg, Va. “He lost the election, and he was put into office because the Russians interfered on his behalf.”

Pressed by moderator Jon Meacham on whether he considers Trump to be “an illegitimate president,” Carter replied: “Based on what I just said, which I can’t retract.”

Sept. 29, 2019. Hillary Clinton said in a “CBS Sunday Morning” interview: “He knows he’s an illegitimate president. I believe he understands that the many varying tactics they used, from voter suppression and voter purging to hacking to the false stories — he knows that — there were just a bunch of different reasons why the election turned out like it did.”

So let’s just stipulate that Paul Krugman’s claim that Democrats “never” questioned Trump’s legitimacy is risible. Krugman knows this – he did it himself. In May 2017, after the firing of FBI Director James Comey, he tweeted, “At this point we arguably do not have a legitimate president or administration.” Krugman added, “He deserves no presumption of innocence, and no deference to claims that he has the right to govern.”

Taking aim at any Republican defending the president, Krugman added, “And again, let's be clear: anyone helping with this obvious coverup is deliberately being complicit with possible foreign subversion.”

In October, he tweeted that anyone who didn’t agree that “a hostile foreign power helped put Trump in office” was a Trump sycophant. This came in the context of his fear, never realized, that Trump would somehow quash Robert Mueller’s investigation. “It seems to me that people aren’t quite getting how close we are to a crisis of legitimacy,” he tweeted. “And in that case how can anyone consider this presidency legitimate?”

That particular crisis was averted, but scouring the digital record for such material almost trivializes the manner in which Trump’s critics refused to accept his presidency.

Just as Donald Trump altered the existing norms of what it meant to act and sound “presidential,” so too did the loyal opposition abandon normal standards of criticism. The first anti-Trump “women’s march,” on Jan. 21, 2017, was essentially a rival inauguration. On the National Mall, Ashley Judd compared Trump to Hitler while Madonna told the crowd she’d been fantasizing “an awful lot about blowing up the White House.” From the goofy Steele dossier, the politicization of the intelligence community, and the impeachment of Trump over a phone call with Ukraine’s president to the mainstream media abrogating its traditional rules of engagement, the efforts to negate Trump’s presidency were unrelenting.

This is the stark reality of our country’s recent political history. Therefore, it’s understandable that Trump and his supporters were initially skeptical of election returns that seemed so promising as the polls closed Nov. 3 only to turn to dust as the mail-in votes were counted.

But here’s another historical fact: Hillary Rodham Clinton, whatever her suspicions or excuses, did exactly what Donald John Trump is refusing to do. She conceded the election. She did it with grace, too, and then she attended his inauguration.

“We have seen that our nation is more deeply divided than we thought,” HRC said in her concession speech. “But I still believe in America and I always will. And if you do, then we must accept this result and then look to the future. Donald Trump is going to be our president. We owe him an open mind and the chance to lead.”

Trump and his supporters would counter that Clinton’s allies neither met him with an open mind nor gave him the chance to lead. Yeah, okay, although there’s a chicken-and-egg argument here. But all that is beside the point now.

Joe Biden won the popular vote in 2020, just as Mrs. Clinton did in 2016, and by a wider margin. Biden did so while carrying the very same swing states that gave Trump his Electoral College win four years ago — and by greater margins. The bottom line is that Paul Krugman’s larger point about the barriers Trump is erecting in Joe Biden path is correct. This week, word is leaking out that Trump plans to hold a rally kicking off his 2024 campaign on Inauguration Day. That’s not only unprecedented; it’s classless. That’s a president’s brain on hyper-partisanship.

No matter how badly Donald J. Trump was treated by the Democrats and the media, the outgoing president simply has no right to put the country through what it is enduring now in the waning days of a hellish year. No excuse, either, legitimate or otherwise.